Was the Resurrected Jesus a Zombie? 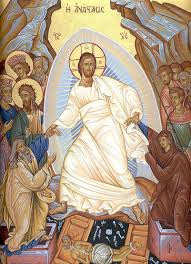 It has become quite common, and a bit overstated, these days to refer to the post-resurrected Jesus as "Zombie Jesus", thinking that there is a comparison between the features of the risen Jesus with that of Zombies as depicted in popular culture, both said to rise from the dead. Usually such comparisons are not based on any compelling intellectual arguments, but it is worth examining nonetheless. Does the resurrected Jesus display Zombie-like characteristics to warrant such a comparison? The folks at ZombieTheology.com examined both features and characteristics in a neutral fashion to give us the answer. After an analysis of the resurrected Jesus as described in the Gospels and the traditional pop culture Zombie depicted by George Romero (of Night of the Living Dead fame), here is what they found:
ROMERO ZOMBIES
- Zombies are human bodies that died and have come back to life.
- Zombies only possess basic motor skills.
- Zombies cannot talk. At best they can communicate like animals through moans and groans.
- Zombies have one intention: to eat the living.
- Zombies are dangerous.
- Zombies are physical, they have no supernatural abilities.
- Zombies bodies are decaying and rotting.
- Zombies are not capable of complex thoughts or problem solving skills.
GOSPEL JESUS
- Yes, Jesus did die and come back to life.
- Jesus built a fire and cooked fish for Peter and a few of his other followers. Building a fire requires use of very fine motor skills. – John 21
- Jesus talks to several people after rising from the dead. – John 21 (for one example)
- Jesus seemed to have no intention of eating people, and we have no record of him eating any humans after rising from the dead; we do however see him eating fish and honeycomb (so not even just meat). – Luke 24:42-43
- Jesus did not seem dangerous at all, on the contrary people were happy to be around him. He traveled with two of his followers (without them even knowing it was him) and they asked him to stay with them when he was getting ready to part from them. If he were dangerous it would not make sense to ask him to stay. – Luke 24:29
- Something really interesting about the resurrected Jesus was his ability to walk through walls and disappear. These seem like some kind of supernatural function which Zombies are incapable of. – Luke 24:31, John 20:19
- Jesus’s body did still have the holes from the spear and nails, but surprisingly Thomas, one of his followers, was not afraid to stick his finger in those holes. Jesus broke bread and cooked fish and people ate these things. If Jesus were a rotting corpse it seems unlikely that people would be so willing to eat the food he prepared or stick their hands in his side. John 20: 27, Luke 24:42-43, John 21
- The resurrected Jesus could talk, he prepared meals, he explained complicated doctrines, asked tough questions, performed supernatural acts, and did several other things that demonstrated problem solving and complex thought processes. His actions and words demonstrated something beyond human, not subhuman such as the living dead.
So whether you are a Christian or not, it is clear from Scripture that the risen Jesus it describes is certainly not a Zombie. One is forced to disbelieve the Bible and write off the resurrection all together, or embrace the Bible’s story and realize that the risen Jesus was someone who was raised in glory, not decay. Whichever you choose, a Zombie Jesus is clearly not an option.
John at 1:57:00 PM
Share
‹
›
Home
View web version