The Theotokos as a Teacher of Asceticism and Noetic Prayer 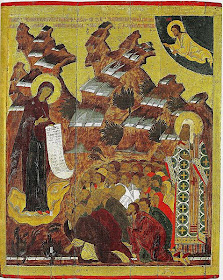 As is well known, in the very extensive writings of St. Nikodemos the Hagiorite (†14 July 1809) there are innumerable laudatory references to the Grace-ﬁlled, most revered, and most beloved name of the All-Holy Mother of our Lord.
However, the Saint’s “encomion” (encomium or laudation) to the Immaculate Maiden, as it emerges with unrivaled lyricism, rhetorical power, and theological depth in the nearly forty pages of his commentary on the Ode of the Theotokos, indisputably reveals him as one of the foremost Mariologists in the Orthodox Church.
* * *
The Ode of the Theotokos, in which Mary, the child of God (Theopais), gloriﬁes and magniﬁes our Lord during her visit to St. Elizabeth after the Annunciation by the Archangel Gabriel, is “in truth admirable, most sweet, and most beloved,” and more so than all the Odes of the Saints from all the ages, because it is an Ode “of her who is holier than all the Saints,” “the author of which was Queen of all and Mother of the Creator of all.” “It is the product, composition, and exclamation of that most godlike mind, that most pure heart, and that most holy mouth, that of the Ever-Virgin Mary, and that of the very Mother of God.”
This marvelous and admirable Ode, which is divided into six verses, has been designated by the God-bearing Fathers to be chanted towards the end of Matins, along with the most sweet refrain and most beloved Troparion, “More honorable than the Cherubim, and beyond compare more glorious than the Seraphim, thee who without corruption gavest birth to God the Word, the very Theotokos, thee do we magnify.”
* * *
In this brief text, we shall cite just a few edifying passages by the great Athonite Mariologist from his commentary on the Ode of the Theotokos, as a humble oﬀering of some morsels of gratitude for, and exaltation of, the extraordinary and incomprehensible majesty of the Virgin Mother, since “the Theotokos renders blessed those who unceasingly and reverently bless her.”
So great and such is the awe of Saint Nikodemos before the spiritual gifts of the Queen of all, that he suddenly breaks into an impetuous torrent of encomia in her honor: “O sweetest in deed and name, Mary, what emotion is this that I feel within myself? I cannot be satiated by praises of your majesty! The more I praise it, the more I long for it, and my yearning increases without end, my desire becoming unappeasable; wherefore, again I desire to praise it!”
The Saint then goes on to enumerate all those engaged in “the logical arts and sciences,” who, each in his own manner, aspires to extol the Most Pure one: grammarians, logicians, rhetoricians, mathematicians, geometers, musicians and chanters, astronomers, moralists, opticians, engineers, physicists, metaphysicians, authorities on the Divine Scriptures, theologians…!
* * *
What makes the deepest impression is that the Theotokos, even though “she surpasses the Angels and Archangels and all the choirs of Heavenly Hosts, not comparatively, but incomparably so”; even though “she became the ornament of the whole world, and the adornment of all creation, and the beauty of the Angels and of man”; even though “she alone stands on the boundary between Creator and creation”; and even though she was “the treasurer and dispenser of the wealth of Divinity” and “steward and guardian [and provider] of all the treasures and gifts of God, the Heavenly King”—for all that, she lived as an ascetic!
The toilsome asceticism of the Mother of God, who, after the Ascension of our Lord, struggled “in fasting, in prayer, in prostrations, and in every sort of ascetic practice,” must be associated also with the activity of noetic prayer, of which the Panagia is considered to be the teacher, because throughout her life—and, to be sure, especially during the twelve years that she spent in the Holy of Holies—, she “was occupied in and dwelt on nothing other than theoria, in other words, the vision of God,” “alone, beholding God alone, and alone, being beheld by God alone.”
She who is full of Grace “by herself found and practiced” “noetic activity (praxis) and vision (theoria),” through which the mind (nous) “rises above all creation and beholds the Glory of God,” which, thereupon, the Most Pure one “transmitted” and taught “to those who came after” this “new path to the Heavens.”
* * *
St. Nikodemos reminds us that “the heart of man was created by God always to return to God and behold its Creator.” This “return” involves the following two stages:
In the ﬁrst stage, we must become “Jacob” (“supplanter”), which is to say that we must become supplanters of the passions, of the Devil, and of sin, by means of “practical virtue,” that is, “through fasting, vigils, prostrations, sleeping on the ground, prayer, hardships, and other bodily exertions.”
In the second stage, we must become “Israel” (“mind that beholds God”), by means of “theoretical virtue”; that is, “through noetic prayer practiced in the heart, we must ascend to what is called the illumination of Divine Grace, which acts and exists in the heart, and, thereby, raise ourselves—or, rather, be raised—by Grace to supernatural and immediate theoria, or, more precisely, to the vision of God.”
* * *
Therefore, through “praxis” and “theoria,” through asceticism and prayer of the heart, with the Theotokos — who is the Mother and bestower of the Gifts of the Holy Spirit — as our constant and unfailing guide and teacher, let us struggle unremittingly for the puriﬁcation and cleansing of the ﬁve senses, of the imagination, of the mind, and of the heart, for only “the pure in heart shall see God.”
Source: Agios Kyprianos, No. 313 (March-April 2003), pp. 214-215.
John at 12:10:00 PM
Share
‹
›
Home
View web version