The Theotokos and the Akathist 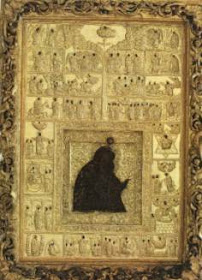 By Hierodeacon Silouan Peponakis
Much has been written and will continue to be written by the Fathers of our Church on the person of the Most Holy Theotokos. No matter how many theological references are made, they will never exhaust the meaning of the mystery. For if the incarnation of Christ is a mystery of the economy of God, this means that the Theotokos who was involved in this work of Divine Economy is a mystery which cannot be interpreted either with the pen or with human words (Hierodeacon Anthony Frangakis, The Cause of the Deification of All Things). Besides, the name Theotokos alone "contains the entire mystery of the economy".
Saint John Chrysostom, referring to the beauty of the Theotokos, writes: "Nothing can be found among men like the Mother of God, Mary. Consider, O man, all creatures and see — is there anything equal or greater than the holy Virgin Theotokos? Go around the earth, plumb the sea, scour thoroughly the air, examine in spirit heaven, consider all the visible and invisible Powers and tell me — is there a wonder similar among all creation?"
The Panagia has been hymned and iconized like no other saint, yet her care for people far exceeds our love towards her person. One such beneficial testimony is the icon of the "Akathist", which is kept in her homonymous chapel in the Sacred Monastery of Saint Dionysios at Mount Athos. The icon of the Salutations of the Panagia "of the Akathist", which gave the name to the one room domed chapel, is the most ancient wondrous icon at Mount Athos.
The following information is taken from a publication of the Monastery: The Sacred Monastery of Saint Dionysios (History, Art, Treasures, Pilgrimage Guide), Mount Athos, 1997.
The icon is made of wax and gum and the characteristics remain inconspicuous because of myrrh which flowed at times. It is considered a priceless treasure of the Monastery and a special blessing of the Theotokos. Patriarch Sergius held this icon in his hands, or some other Bishop, while it was carried around the walls of Constantinople to encourage the few soldiers and people who remained in the city during the invasion of the Avars and Slavs (624 A.D.) while Emperor Heraclius was away on an expedition against the Persians. Eventually the fleet of the enemy was destroyed by a storm that saved the city. The icon was transferred by procession to the church and would be set up for veneration on a brightly decorated throne on the left side of the church nave, on great feasts such as Easter, Christmas, Theophany and the Nativity of the Forerunner, as well as on the day of its celebration, the Fifth Saturday of Great Lent (Saturday of the Akathist).
At the bottom of the silver covering is the inscription: "Pray for the servant of God Jeremiah the Archbishop, 1786 May 20". On the back side of the icon is preserved an image by one named George in 1786 showing the tradition of Emperor Alexios Komnenos meeting the founder of the Monastery, Saint Dionysios, at Trebizond in 1374, accompanied by the following relevant inscription: "This miraculous icon, which was carried by Sergius the Patriarch and processed around the walls of Constantinople, and caused all rivals to flee, was donated by the king to Saint Dionysios." The icon seems to be of the Glykofilousa (Sweet-kissing) type and is surrounded by the 24 oikos' to the Panagia chanted in the Akathist Hymn. On the top, in the center, is an image of God the Father sending forth the Holy Spirit.
There are many miracles attributed to the holy icon of the Akathist. One of these has to do with it being stolen and returned to the Monastery. Specifically, pirates in a ship stole the icon at one time with its precious treasures, but after a big storm and being pushed out to sea, the Theotokos appeared to them expressing her desire to remain in the Monastery. The pirates then saw the icon gush myrrh, which drenched the box that contained the icon. In fear they immediately returned the icon to the Monastery, while two pirates stayed behind and became monks.
Source: Translated by John Sanidopoulos
John at 5:33:00 PM
Share
‹
›
Home
View web version