The Sacred Number of 40 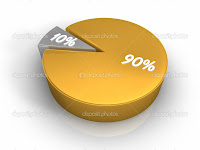 By Sergei V. Bulgakov
The number 40 relates to those few significant numbers (3, 7, 9), which have become known all over the world from deep antiquity, even from the time before Christianity. The number 40 was pointed out and determined by God Himself, and was revealed from above as the appointed measure of fulfillment of some ascetical feats and even the preoccupations in the life of the forefathers, the prophets. At all times, from the beginning of the world, the term of repentance and correction of sinners was usually determined by the number of forty days, and sometimes even by a year (Gen. 6:4-16; Acts 7:22-36; Ex. 34:28; 3 Kings 19:8; Ezek. 4:6). In Christian history the number 40 is sacred and confirmed anew, with even much greater and sacred examples. The Savior Himself, fulfilling the law, is brought into the temple on the fortieth day. Preparing to announce the good news of the Gospel to the world, He leaves for the desert and fasted there for forty days. After His resurrection He willed to remain on earth for forty days before His ascension into heaven. Following this great example, the Holy Church in the very beginning blessed the number forty, as a specially significant number: such as, the fortieth day after birth, the fortieth day after death, the forty day repentance, and, finally, established the forty-day fast, the Holy Forty Days. Besides this, the Holy Forty Days is actually 36 days (when we exclude Sundays which, strictly speaking, cannot be ranked as days of contrition and fasting), is, by approximate calculation, a tenth part of the whole year. Therefore the Holy Forty Days is not like other periods in the Old Testament, from of old a torah tithe to God. There are divinely determined tithes in every year, and consequently even all our life is a tithe, in which we, being released by this time from everyday amusements, dedicate our primary service to God.
"In the law", teaches the Venerable Abba Dorotheus, "it is written that God has enjoined the Sons of Israel to give a tithe of everything they have every year, and, doing so, they have been blessed in all affairs. Knowing this, the holy apostles have established and turned over help to us, and as blessing for our souls, something still greater and higher, that we separate a tithe from the days of our life and consecrate it to God. That we also, thus, received a blessing on all our affairs and every year cleansed the sins made by us during the whole year. Having judged so, they have consecrated these seven weeks of the Holy Forty Day Fast out of the three hundred sixty five days of the year for us. Thus, they have set apart these seven weeks; but in due course the fathers wisely decided to also add one more week to them. First, they wished to enter into an ascetic effort of the fast they were already accustomed to during the course of these weeks as if they prepared for this. Second, to honor the fast of the Holy Forty Days, which our Lord Jesus Christ fasted. For, having taken away Saturdays and Sundays from the eight weeks, we have forty days, and the fast of Holy Saturday is regarded special because it is the most sacred and unique fast of all the Saturdays of the year. And seven weeks without Saturdays and Sundays make thirty-five days. Then having applied the fast of holy and great Saturday and half of the bright and light-bearing night, we have thirty six and a half days, that accurately makes the tenth part of the three hundred sixty five days of the year."
Source
John at 9:54:00 AM
Share
‹
›
Home
View web version