The Flowers and the Holy Water 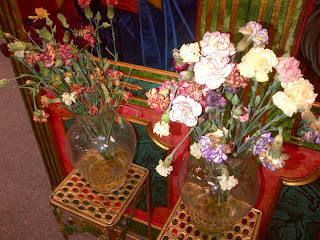 By Wesley J. Smith
I was busily preparing the church for Liturgy as usual a few weeks ago when my friend Mark approached. “Can you tell the difference between the two bouquets?” he asked, referring to flowers in vases on either side of the Royal Doors. I took a look. One of the bouquets was withered and dry, the other fresh. When I expressed surprise at the startling contrast, Mark smiled. “On Theophany I put my old Holy Water in the vase with the fresh flowers before filling my container with the new.” He also told me that he had not put any in the vase with dry flowers.
That got my attention! The flowers were identical inexpensive bouquets that had been purchased by a parishioner from Safeway for under $5 each. She had given them to me prior to the December 23 Liturgy. I had cut the bottom off their stems to maximize freshness, put them both in identical inexpensive glass vases with water, and then placed them in their current locations. No plant food or preservatives were added to the water of either vase. Neither, as far as I know, had either been touched since. The only apparent difference between the handling of the two bouquets was Mark pouring his Holy Water into the vase containing the still-fresh flowers.
I showed the contrasting bouquets to our priest, Fr. John, and received his blessing to mention the attention-getting phenomenon during my usual announcements at the end of Liturgy. More than a few eyebrows were raised. That was Sunday, January 20. The “Holy Water flowers” remained fresh on January 27, and Fr. John referenced them in his homily. I took the photo accompanying this article the next week, on February 3—at least six weeks from the date the flowers were put in their respective vases.
I thought the Holy Water flowers were noteworthy enough to send a photo and description to His Eminence, Archbishop Benjamin, who replied, “It is wonderful when God breaks into our ordered world with its assumptions and categories and does something small that disturbs them. It is like a little nudge to say – ‘I am still here and still in charge no matter what you think.’”
Indeed. More than that, if the continuing freshness of one bouquet for more than six weeks is a little miracle—and I think it is—materialism is proved to be false. For if God can give us a little “nudge,” it means there is more to existence than news, weather, and sports: There is Abundant Life.
We are not to seek after signs. But isn’t it sweet when, in His graciousness, He unexpectedly sends one our way? Glory to God! Glory forever!
Wesley J. Smith is a sub-deacon at St. Innocent Orthodox Church in Livermore, California
Source
John at 11:38:00 AM
Share
‹
›
Home
View web version