Stolen Icon of St. Photios Returns to Cyprus After 40 Years 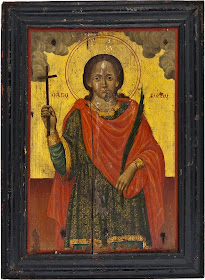 After a forty year odyssey, the 19th century icon of St. Photios, from the homonymous church of the village Agia Triada in Karpasia Peninsula, has made its way back to its homeland in Cyprus.
The icon returns thanks to the coordinated actions between the Synodical Committee of Monuments and Art of the Church of Cyprus, the refugee residents of Agia Triada and other compatriots who were called to this sacred purpose.
Specifically last December, the icon of St. Photios (49x36 cm) was traced and identified in an auction house of Dusseldorf (Germany), in order to be auctioned on the 26th of January 2013. The Cypriot origin of the icon was certified after an investigation and reliable eyewitness testimonies. The icon was stolen from the Church of Saint Photios in occupied Agia Triada during the Turkish invasion by the Turkish occupation forces in July 1974.
For this reason Bishop Porphyrios of Neapolis, Director of the Representative Office of the Church of Cyprus in Brussels, travelled on Saturday 26 of January 2013 to Dusseldorf, and regained the icon. Very soon it will be repatriated to Cyprus and will be hosted in the refugee Church of the Three Hierarchs, in Livadia of Larnaca, until the day that the occupied Church of St. Photios will be liberated from the occupying forces. The Church of the Three Hierarchs in Larnaca, is being operated by the displaced priest of the community, Oikonomos Konstantinos Papakostas.