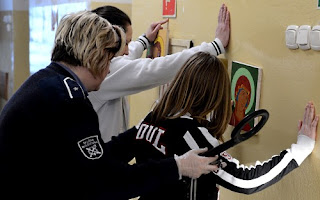 February 12, 2013
Agence France Presse
Behind the bars of a prison on Poland's eastern fringe, a dozen women serving time are lost in concentration as they learn the intricate art of icon-writing in the Orthodox Christian tradition.
The centuries' old craft, which typically displays the Virgin with the baby Jesus, saints and Christ in rich strokes of dark red, green and gold is being used for the first time as part of a social reintegration program at a major correctional facility in Bialystok.
"It's my first icon of the Virgin," Malgorzata Zablocka-Jaronczyk, 47, says proudly as she paints a golden halo around the head of an unfinished Madonna to whom she says she prays.
"I never learned to paint. It never really interested me much. And here, I've started to make progress. I can see it for myself. I'm pleased with what I'm doing," says Malgorzata, who has eight years left on a 24-year sentence for financial crimes, reduced by a third for good behavior.
"You can use two colors to create the halo. It creates a very good effect. It was a technique used in the 17-18th centuries in Russia to write icons," iconographer Jan Grigoruk, teaching the art at the Bialystok prison, tells his students.
"It's appropriate to say 'write,' because in the formal terminology we say icons are written, not painted," explains Grigoruk, who teaches the technique as well as the language, history and symbolism of the icons.
The inmates are learning from the best, as Grigoruk works at the Museum of Icons in an Orthodox monastery in the nearby Suprasl, a stone's throw from the Belarussian border.
Opened in the 1960s with a collection of nearly 1,200 icons dating from the 18th through the 20th centuries, the museum is a treasure trove for samples of this Eastern Orthodox art form with origins almost as old as Christianity itself.
A Change of Heart
"At first, the women were coming to the studio to kill time. Some came as a reward for good behavior as prison wardens had to choose from among 70 inmates," Grigoruk told Agence France Presse.
"Everyone who writes an icon undergoes a real spiritual transformation," he said. "Icon-writing is already a form of prayer. It can't be merely a job to earn your living."
For Orthodox Christian believers, when writing an icon, the artist's hand is guided by God.
While painting lessons are common in prisons, in icon-writing art mingles with the spiritual. Inmates also say the lessons bring them inner peace.
Justyna Gierasimiuk, 31, serving a one-year sentence, looks forward to them.
"Oh yes, they do calm me down and God knows I need that! Being aggressive is pretty common inside a prison cell," she told AFP.
A dozen men in this mixed-gender prison holding more than 700 inmates also took their first lessons last year, including several serving life sentences, says Jaroslaw Andrzejuk, a prison educator.
Their icons were blessed by Jakub, the Orthodox archbishop of Bialystok, who called the program "a brilliant idea."
The most beautiful works will go on display in a small prison chapel.
With a population of 38.2 million and the homeland of the late Pope John Paul II, Poland is overwhelmingly Roman Catholic, but counts some half a million Orthodox faithful, located mostly in the eastern Bialystok region.
Last August, a visit to Poland by Russian Orthodox Patriarch Kirill made history as the first-ever of its kind. Kirill and the head of Poland's Catholic Church, Archbishop Jozef Michalik, made an unprecedented appeal for Polish-Russian reconciliation intended to put centuries of bloody history behind them.
Grigoruk, who dreamt up the icon-writing program along with the prison's Orthodox priest, is planning more lessons.
"We would like to sell the icons to raise money for charity. There's considerable demand for them," he said.
For the moment, the inmates have to write their icons on 12-millimeter-thick (half-inch) plywood as linden wood, the traditional material, is too expensive.
Financing for the program comes from a special aid fund for the prisoners, says prison spokesman Wojciech Januszewski.
"We can't put people behind bars and leave them like that. We're hoping that the demanding art of icon-writing will change them, that they will become better people," he said.
John at 1:34:00 PM
Share
‹
›
Home
View web version