Istanbul and Trebizond Hagia Sophia's May Turn To Mosques 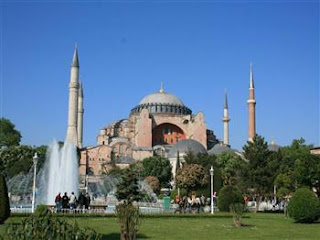 February 5, 2013
Hurriyet Daily News
The historical Hagia Sophia in Trabzon will soon be opened up for prayers, according to the Foundations Directorate Head Adnan Ertem, while a parliamentary commission is also considering an application to reopen Istanbul’s Hagia Sophia Museum for prayers.
Ertem said five of the seven Hagia Sophia's nationwide were currently functioning as mosques, but two were still inactive, adding that the Culture Minister was the “occupying force” in the decision to reopen Trabzon’s mosque.
“We have won the court case regarding the situation,” Ertem said. “We are planning to open the place for prayers again after the necessary processes are completed.”
Ertem refrained from commenting on whether or not the same situation could be said about Istanbul’s Hagia Sophia.
“The Hagia Sofia Mosque in Istanbul is a mosque, and will remain one forever,” Ertem said. “However, we are not the authority [to open the mosque to prayers]. We can only voice the state of it, and the fact that it is accepted as a mosque by everyone, but we cannot decide on it.”
Three citizens living in the northwestern province of Kocaeli recently applied to a parliamentary commission with a request to change the status of Hagia Sophia, attaching a survey of 400 people favoring the active use of the mosque. The application has been taken under consideration by Parliament’s Petition Commission, with several online petitions also lending support, Anatolia news agency reported on Sunday. The commission will be asking for the opinions of the related institutions on the issue.
The Hagia Sophia Museum was first dedicated as an Orthodox patriarchal basilica in 360 A.D. Until the year of 1453 it served as the Greek Patriarchal cathedral of Constantinople. Following the city’s conquest by the Ottoman Empire, the building was converted into a mosque in 1453 and remained so until 1931, when it was closed to the public for four years. It was reopened by the republican authorities in 1935 as a museum.
From Zaman:
The Acting Chairman of Turkey’s Parliamentary Committee for Petitions Halil Ürün has announced that the Committee has received a large number of requests for the Ayasofya (Hagia Sophia) to be reopened to worship (i.e. to become a mosque once again). He said he supported what he called these justified demands. On 14th February the Turkish press (Zaman and Milliyet) reported Ürün as saying that until it was turned into a museum in 1935 it had been used for worship. He pointed out that the building is registered as belonging to the vakıf of Sultan Mehmet the Conqueror and stressed that bedel (compensation) had been paid at the time of the conquest to the Patriarchate. Halil Ürün, who is MP for Afyon, said he expected objections to the proposal to come from the western world. However, he said these could be rebutted by reference to the Grand Mosque in Cordoba, which had been turned into a church. Greek Orthodox citizens in Turkey could be made content by opening the Aya İrini Kilisesi (Hagia Eirene) to (Christian) worship, which could provide balance. That would please Greek Orthodox citizens, he said. “My own view is that the Ayasofya absolutely must be reopened for worship and no-one should be upset about it. It was converted into a mosque, but compensation was paid. And it has been restored many times. Thanks to the valuable restoration work by Mimar Sinan, the building is still standing. Seventy five million people want Ayasofya opened for worship,” he is quoted as saying.
John at 2:36:00 PM
Share
‹
›
Home
View web version