Elder Paisios on the Arena of Great Lent 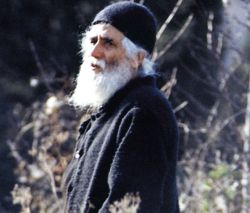 Elder, how can I struggle more with temperance during Lent?
Now during Lent those in the world in some way take greater care to show temperance, but we monks must always be careful. Above all one must be careful, however, of the passions of the soul and then the body. Because if one prioritizes bodily asceticism and does not struggle to eradicate the passions of the soul, he will do nothing.
A layman once went to a monastery in the beginning of Lent and there a certain monk appeared to him to be abrupt and rough. However the poor man had good thoughts and justified him. He later came to me and said:
"I do not blame him, Father. After all, he just completed the Three Day Fast!"
If he had done the Three Day Fast in a spiritual way he would have had a spiritual sweetness and would have spoken to him with goodness. But he pushed himself egotistically to do the Three Day Fast, and so he placed blame everywhere.
Elder, what should I think about during Lent?
You should think of the Passion, the sacrifice of Christ. We monks must continuously live the Passion of Christ, and we are helped in this daily through the various troparia hymns - all the Services.
We are given the greatest opportunity during Great Lent to struggle and participate more in the saving Passion of Christ, with repentance and prostrations, with the cutting off of the passions and the decreased food, for the love of Christ.
We must utilize, as much as we can, this spiritual arena, with the many opportunities and preconditions it gives us to approach closer to the Crucified Christ, to be helped by Him and rejoice in His Holy Resurrection spiritually changed, since we would have lived Great Lent more spiritually.
I pray you good strength during Great Lent, that you may climb Golgotha to be near Christ, together with the Panagia and your patron St. John the Theologian, and that you may participate in the terrible Passion of our Lord. Amen.
From Γέροντος Παϊσίου Αγιορείτου, Λόγοι ΣΤ΄, «Περί Προσευχής», εκδόσεις Ιερόν Ησυχαστήριον «Ευαγγελιστής Ιωάννης ο Θεολόγος», Σουρωτή Θεσσαλονίκης 2012, σελ. 199-200. Translated by John Sanidopoulos.
John at 11:44:00 AM
Share
‹
›
Home
View web version