An Introduction to the Synodikon of Orthodoxy 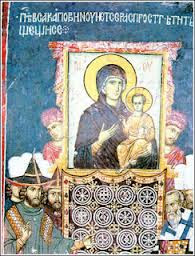 By Metropolitan Hierotheos of Nafpaktos
The “Synodikon of Orthodoxy” is a text contained in the “Triodion” and read on the Sunday of Orthodoxy, the first Sunday of Lent.
It is well known that through the ages various heresies have appeared which deny the experience of revelation and in fact make use of philosophy and conjecture, doubting the Church’s truth on various dogmatic topics. The Fathers who formed the Synods opposed these errors. The decisions of the Synods on dogmatic topics are called “provisions”. More generally speaking, each decision of the Synods is called a “Synodikon”. Thus we have the synodical tome and the synodical provision, and moreover, each synod has its own synodikon.
The “Synodikon of Orthodoxy” is the decisions of the Seventh Ecumenical Council, which refer to the veneration of holy icons. The reading of them on the Sunday of Orthodoxy gave the title “Synodikon of Orthodoxy”. Of course it must be said that later there was also added to the “Synodikon of Orthodoxy” the definition of faith of the hesychastic Councils of the fourteenth century. Thus the “Synodikon of Orthodoxy” comprises the decisions of both the Seventh Ecumenical Council and the Councils of the fourteenth century, which, as will be said below, have all the elements to characterize and regard as a Ninth Ecumenical Council.
An analysis will be made of the “Synod of Orthodoxy” in its central points. There will not be a broader analysis of the whole Council, but what I consider to be the main points will be emphasized  because they express the ethos of the Church. And this is necessary, because the mind of the Church is linked to, and in harmony with the decisions of the Fathers of the Church as it has been expressed with conciliar authority.
l. Church and Synods
However, before proceeding to analyse the “Synodikon of Orthodoxy”, I think it well to examine briefly the large subject of the relationship of the Church with the Synod.
When some heresy springs up, the holy Fathers confront it at the place where it appears. Arios, who proclaimed that Christ is the first creature of God and essentially denied the divinity of Christ, was confronted by the Council of Alexandria. But then, when his heretical opinions began to be disseminated beyond the borders of Alexandria as well, the subject was confronted by the First Ecumenical Council. The holy Fathers were called together to make a common decision about the formulation of the orthodox teaching. In the Councils the holy Fathers did not seek to find the truth, making conjectures by reasoning and imagination, but in order to confront the heretics they attempted to formulate in words the already existing revealed Truth, of which they also had their own personal experience.
St. Nikodemos the Hagiorite divides the Councils into Ecumenical, Local and Rural. This division is not according to subjects, but according to the persons who brought them together, for it is possible that the subjects of the Local Councils can refer to serious dogmatic questions.
A Rural Council is a meeting which is convoked by the Bishop, Metropolitan or Patriarch alone with his own Clergy, without the presence of other Bishops.
A Local Council is a meeting in which the Metropolitan or Patriarch joins with his own Bishops or Metropolitans. This takes place when the Bishop of a district or the Bishops of two districts come together to confront various burning questions of the Church.