A Weeping Icon of the Theotokos in Burgas 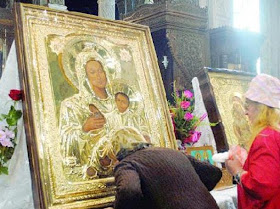 According to Romfea.gr on 23 March 2013, hundreds of believers flocked to the Cathedral of St. Cyril and Methodios in Burgas, Bulgaria to venerate and get the blessings of the Holy Icon of the Theotokos “Panagia Kasperofskagia” which miraculously wept on the first Sunday before Lent.
According to the parish priest, Fr. Peter, the Icon began to weep as he was in the process of taking icons outside to perform an outdoor Divine Liturgy. Among them was the Russian Holy Icon of Panagia Kasperofskagia, which was donated to the Cathedral when it was established. Initially he was struck with fear and believed it was a bad omen. After notifying the Metropolitan, news immediately spread of the phenomenon.
The Holy Icon of Panagia Kasperofskagia has been working miracles since the 16th century when Russian Serb refugees brought it from Transylvania.
Residents of Odessa also believe that their freedom from under British occupation during the Crimean War of 1854 was through the intervention of Panagia Kasperofskagia. 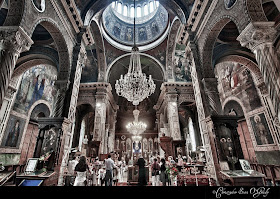 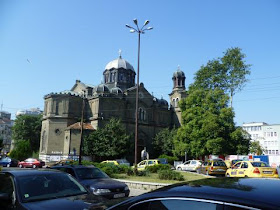