Saint Nikon the Dry, the son of rich and illustrious parents, gave up everything for Christ and became a monk at the Kiev Caves Monastery. In the year 1096, during the incursions of Khan Bonyak, he was taken into captivity with some other monks. The captors treated St Nikon harshly, while waiting for a ransom to be paid. When the saint refused to be ransomed, his masters began to torment him with hunger, and left him exposed in the heat of summer and the cold of winter. He was mistreated and beaten every day for about three years, for his captors thought he would change his mind and send word to his relatives, asking to be ransomed.
While St. Nikon the Dry was a slave among the Tartars, his master became sick and was at the point of death. Seeing that he would soon die, he ordered his sons to crucify Nikon at the head of his grave after his death. St. Nikon, discerning the future, saw that his cruel master would be baptized and prayed to God for his restoration to health. Contrary to all expectations, the Tartar recovered. Thus, by prayer, Nikon saved himself from physical death and his master from spiritual death.
The saint gave thanks to God for everything, and once said to his tormentor that the Lord, through the prayers of Sts Anthony and Theodosius, would return him to his monastery within three days, as St Eustratius (March 28) had predicted while appearing to him.
The captor cut the tendons in St Nikon's legs and set a strong guard over him. But suddenly, on the third day at the sixth hour, the holy captive became invisible. At the moment the guard heard the words, "Praise the Lord from the Heavens" (Ps. 148). 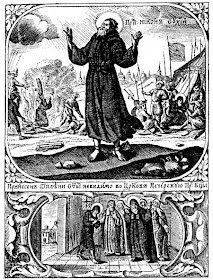 St Nikon was transported to the Dormition Church, where the Divine Liturgy was being served. The brethren surrounded him and began to ask how he got there. St Nikon wanted to conceal the miracle, but the brethren implored him to tell the truth.
St Nikon did not want to have his fetters removed, but the abbot said, "If the Lord had wanted you to remain fettered, He would not have delivered you from captivity."
After a long while St Nikon's former master came to the Kiev Caves Monastery and recognized his former captive, who was withered from hunger and the loss of blood from his wounds. He came to believe in Christ, and accepted Baptism. After receiving monastic tonsure, he became a novice under St Nikon's direction.
St Nikon died at the beginning of the twelfth century and was buried in the Near Caves. Though he did not enjoy good health in this life, his holy relics were glorified by incorruption. He was called dry because, as they say in the memory of the Monastery of the Caves, “he died from the loss of blood and decayed from his wounds". His relics repose in the St. Anthony Cave. There is a special service for him.
His memory is celebrated on December 11th and also on September 28 and on the Second Sunday of Great Lent.
Source 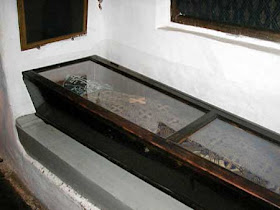