Saint Markellos, Abbot of the Monastery of the Unsleeping Ones (+ 485) 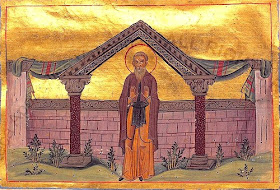 St. Markellos of the Akoimeton Monastery (Feast Day - December 29)
Verses
Bound by sleeplessness throughout the years of his life,
Markellos has a short sleep in the grave.
Saint Markellos (Marcellus), abbot of the Monastery called "the Unsleeping Ones" ("Akoimeton"), was a native of the city of Apamea in Syria. His parents were wealthy, but died when he was young. He received his education first at Antioch, and then at Ephesus. All his possessions left him by his parents he distributed to the poor, thereby sundering his ties to the world.
Under the guidance of an experienced elder at Ephesus, Markellos entered upon the path of asceticism. He later went on to Byzantium to Saint Alexander, abbot of the Monastery named "the Unsleeping Ones." The Monastery received its name because in it psalmody was done constantly, both day and night, by alternating groups of monks. As the biographer of both these Saints writes: "Later, a venerable monastery was established near the mouth of Pontus - that is, the place where the Black Sea tracts into the Bosphorus - and he introduced a rule that, though new, was superior to any found elsewhere; that is, that henceforth they should never be any cessation in the hymnody offered to God, but that through an unbroken succession of those that served in turn, there should be achieved this continuous and unceasing glorification of our Master." The practice of never-ceasing service to God spread throughout the Empire, in both the West and the East. The monks were divided into three companies according to the language they spoke: Greek, Latin, or Syriac; each company took its turn celebrating the services in its particular language, and thus every hour of the day was given over to God's glory. The monastery not only grew but gave birth to others, such as the famed Studion Monastery in Constantinople which was founded by monks from Alexander's Monastery. Saint Alexander accepted Markellos and tonsured him into the monastic schema. Zealous in the works of watchfulness, fasting and prayer, the Saint received great spiritual talents and the gift of clairvoyance. Markellos foresaw the day of Abba Alexander's death and his own election as abbot. However, since he was still young, he did not want to rule others. So he slipped out of the Monastery to visit other provinces and other monasteries, where he received edification from the monks who lived there.
After the death of Saint Alexander, when Abba John had already been chosen as abbot, Markellos returned to the great joy of the brethren. Abba John made Markellos his own closest assistant. After John's death, Markellos was chosen abbot of the Monastery in spite of his own wishes, and in this position he remained for sixty years.
News of his saintly life spread far. People came to Markellos from afar, both the illustrious and the common, rich and the poor. Many times they saw angels encircling the Saint, attending and guarding him. With the help of God, the Monastery of the Unsleeping Ones flourished. So many monks came to place themselves under the direction of Saint Markellos that it became necessary to enlarge the Monastery and the church.
Saint Markellos received donations from believers for expansion, and built a beautiful large church, a hospital, and a hostel for the homeless. By his prayers the monk treated the sick, cast out devils and worked miracles. For example, one of the monks was sent to Ankara and fell ill. Being near death, he called out mentally to his elder. At that very hour Saint Markellos heard his disciple in the Monastery, and he began to pray for him. He who was sick recovered at once.
When a ship with his monks came into danger on the Black Sea, the Saint calmed the tempest by his prayers. Another time, when they told him that a fire was raging at Constantinople, he prayed tearfully for the city, and the fire subsided as if extinguished by the tears of the monk.
John, the servant of a certain Arian nobleman named Ardaburios, was unjustly accused of something, and he hid out at the Monastery to escape his master's wrath. Ardaburios twice demanded that Markellos hand John over to him, but he refused. Ardaburios then sent out a detachment of soldiers, who surrounded the Monastery, threatening to slay anyone who interfered with their mission. The brethren went to the elder, asking him to surrender John and save the Monastery. Markellos signed himself with the sign of the Cross, then boldly went out alone through the Monastery gate towards the soldiers. Lightning flashed in the sky, thunder rumbled, and the Cross appeared shining brighter than the sun. The soldiers threw down their weapons and took to flight. Ardaburios, learning from the soldiers what had happened, was frightened, and because of Saint Markellos he pardoned the servant.
Saint Markellos took part in the Synod of Chalcedon, defending Orthodoxy against the Monophysite heresy both at the Synod and in the years that followed. His generosity and contempt for worldly wealth were known to all: anyone who came to the Monastery in need received alms, but God always replenished the funds so that more could be given. When Markellos inherited his family's fortune upon his brother's death, he kept none of it either for himself or even for his Monastery, but distributed it to poorer communities and to the needy.
Venerable Markellos peacefully departed to the Lord in the year 485. His faithful disciple Lucian grieved terribly over him, but on the fifth day after the death Saint Markellos appeared to him and comforted him, foretelling his own impending end. 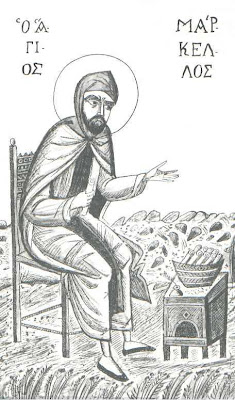 Apolytikion in the Plagal of the Fourth Tone
The image of God, was faithfully preserved in you, O Father. For you took up the Cross and followed Christ. By Your actions you taught us to look beyond the flesh for it passes, rather to be concerned about the soul which is immortal. Wherefore, O Holy Markellos, your soul rejoices with the angels.
Kontakion in the Fourth Tone
Though clad in a mortal body, O Markellos most wise, thou strovest to emulate the Angels' choirs in divine perpetual hymnody. And as an unsleeping shepherd of thy monastics, thou wast an example of true prayer and devoutness; O Father, intercede with the Lord, that He would save our souls.