Nineteen Hymns on the Nativity of Christ 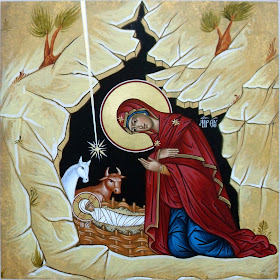 19 Hymns for the Nativity of Christ by St. Ephraim the Syrian
This is the month which brings all manner of joy; it is the freedom of the bondsmen, the pride of the free, the crown of the gates, the soothing of the body, that also in its love put purple upon us as upon kings.
This is the month that brings all manner of victories; it frees the spirit; it subdues the body; it brings forth life among mortals; it caused, in its love, Godhead, to dwell in Manhood.
In this day the Lord exchanged glory for shame, as being humble; because Adam changed the truth for unrighteousness as being a rebel: the Good One had mercy on him, justified and set right them that had turned aside.
Let every man chase away his weariness, since that Majesty was not wearied with being in the womb nine months for us, and in being thirty years in Sodom among the madmen.
Because the Good One saw that the race of man was poor and humbled, He made feasts as a treasure-house, and opened them to the slothful, that the feast might stir up the slothful one to rise and be rich.
Lo! The First-born has opened unto us His feast as a treasure-house. This one day in the whole year alone opens that treasure-house: come, let us make gain, let us grow rich from it, ere they shut it up.
- From Hymn 4
John at 11:26:00 AM
Share
‹
›
Home
View web version