His Eminence recalls how he visited Elder Porphyrios in Athens in his early 20's after he completed studies on Mount Athos. He remembers the deep impression the Elder made on him and the relaxed atmosphere the Elder created to allow him to give an open and honest confession of his sins. In particular, he never gave advice or responses to his confession. One day, not long after, when he was in his apartment in Athens, His Eminence was inclined to go to his window, and when he did he saw Elder Porphyrios outside, who had come to see him. After chatting, the Elder brought him into contact with the Metropolitan of Patras, and from there his life path began. For seven years he served as deacon under the Metropolitan of Patras, and from there went to Cyprus where he met Archbishop Makarios, who influenced him to pursue higher learning that would eventually bring him to serve as Metropolitan of Atlanta. His Eminence always saw these things as Divine Providence through Elder Porphyrios.
On February 26, 1992 His Eminence Metropolitan Alexios was shot, and the bullet is still in him. After losing much blood, he survived. That night he recalled it was the feast of St. Porphyrios, and believed that his survival was through the prayers of Elder Porphyrios. 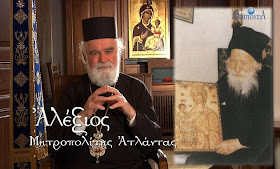