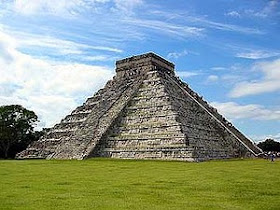 December 4, 2012
The Associated Press
There are reports of unusual behaviour from across Russia's nine time zones.


Inmates in a women's prison near the Chinese border are said to have experienced a ''collective mass psychosis'' so intense that their wardens summoned a priest to calm them. In a factory town east of Moscow, panicked citizens stripped shelves of matches, kerosene, sugar and candles. A huge Mayan-style archway is being built - out of ice - on Karl Marx Street in Chelyabinsk in the south.
For those not schooled in New Age prophecy, there are rumours the world will end on December 21, 2012, when a 5125-year cycle known as the Long Count in the Mayan calendar supposedly comes to a close. Russia, a nation with a penchant for mystical thinking, has taken notice.
Last week, Russia's government decided to put an end to the doomsday talk. Its minister of emergency situations said on Friday that he had access to ''methods of monitoring what is occurring on the planet Earth,'' and that he could say with confidence that the world was not going to end in December. He acknowledged, however, that Russians were still vulnerable to ''blizzards, ice storms, tornadoes, floods, trouble with transportation and food supply, breakdowns in heat, electricity and water supply.''
''You cannot endlessly speak about the end of the world, and I say this as a doctor,'' said Leonid Ogul, a member of Parliament's environment committee.
''Everyone has a different nervous system, and this kind of information affects them differently. Information acts subconsciously. Some people are provoked to laughter, some to heart attacks, and some - to some negative actions.''
Russia is not the only country to face this problem. In France, the authorities plan to bar access to Bugarach mountain in the south to keep out a flood of visitors who believe it is a sacred place that will protect a lucky few from the end of the world. The patriarch of Ukraine's Orthodox Church recently issued a statement assuring the faithful that ''doomsday is sure to come,'' but that it will be provoked by the moral decline of mankind.''
In Yucatan state in Mexico, which has a large Mayan population, most place little stock in end-of-days talk. Officials are planning a Mayan cultural festival on December 21 and, to show that all will be well after that, a follow-up in 2013.


Last week, lawmakers took up the matter, addressing a letter to Russia's main television stations asking them to stop airing material about the prophecy.
Russians are approaching the deadline with their characteristic mordant humour. An entrepreneur in the city of Tomsk has sold several thousand emergency kits, a $29 package including sprats, vodka, matches, candles, a string and a piece of soap.