Synaxarion of Saint Stylianos of Paphlagonia 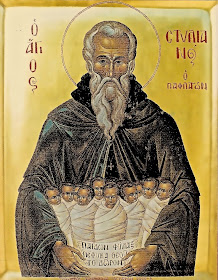 On the twenty-sixth of this month [November], we commemorate our Venerable Father Stylianos of Paphlagonia
Verses

The firm pillar of asceticism has fallen,
For Stylianos has left this life.
Stylianos joyfully stands by God on the twenty-sixth.
From the time he was in the womb of his mother, he was sanctified, and became a dwelling-place of the Holy Spirit. For this reason he distributed the riches he had to the poor, and became a monk, surpassing all the monks of his time by his hard struggles and arduous asceticism. Later he went to the desert, and entered into a cave. There he received food by a divine Angel, and he became a physician of various untreated passions.*

When a death-bearing sickness comes to an infant and dies, and the parents are left childless, then, whatsoever mother calls upon Saint Stylianos with faith, and paints his holy icon, will give birth to other children. Also the sick infants are released from their sickness.**

In this way the renowned one conducted himself, and having done many healings and miracles, he then departed to the Lord.***

Notes:
* He was probably born in the sixth century in Paphlogonia, though this is uncertain. We know that Paphlogonia had a portion of his relics. Interestingly, Saint Alypios, who was a pillar saint or stylite, was also from Paphlogonia, lived at the same time as Saint Stylianos, and the name Stylianos comes from the Greek word for "pillar."

** On the island of Icarus there was a tradition to keep an icon of St. Stylianos in the house, and when a child came down with a sickness the parents would bring the icon to the Divine Liturgy and then bless the child with it. In Crete the parents of children who died named the departed child "Stylianos" if a boy or "Styliani" if a girl. Even during the time of illness, the child's name may be changed to "Stylianos". Among the Vlachs one also finds men named "Stergios" or "Stelios" to fulfill a vow of the mother who had trouble bearing children.

*** The skull of St. Stylianos is kept at the Metropolis of Thessaliotidos. Other portions of his relics are at the Monasteries of Damastas in Fthiotidos, Leimonos in Lesvos, Dadiou in Fthiotidos, and Kato Xenias in Almyros of Magnesia. 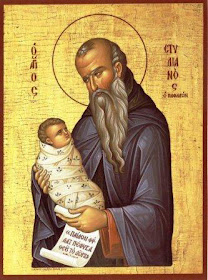 Apolytikion in the Third Tone
A living pillar of abstinence, an immovable pillar of the Church, you showed yourself to be blessed Stylianos, having been dedicated to God from your youth, you were perceived to be a dwelling-place of the Spirit. O Venerable Father, entreat Christ God, to grant us the great mercy.
Kontakion in the Fourth Tone
Sanctified from the womb like another Samuel, you glorified God by your labors. Having becme a healer and protector of Christ's babes and sucklings, He has glorified you, O Stylianos.