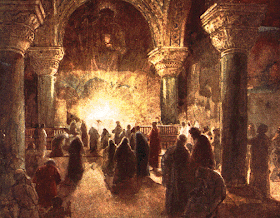 God has appointed you as bishops and has given to you the power of judging also about us; and, therefore, we rightly are judged by you, but you cannot be judged by men. And on this account await the judgment of God alone among you and to that divine investigation let your quarrels, whatsoever they are, be reserved. For you also have been given to us by God as gods and it is not suitable that man should judge gods, but He alone, about whom it has been written: “God has stood in the congregation of the gods; moreover in the midst He judges among the gods.” And, therefore, after these matters have been dismissed, apart from any contention of spirits decide those things which pertain to the faith of God. (Rufinus)