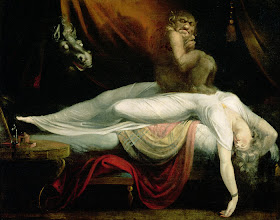 By John Sanidopoulos
"There is also a very general rumor. Many have verified it by their own experience and trustworthy persons have corroborated the experience others told, that sylvans and fauns, commonly called incubi, have often made wicked assaults upon women."
- St. Augustine of Hippo ("The City of God")
One summer day in 1991 I was in Athens sitting in my cousin Dimitra's house watching television with my pious grandmother, as she was cleaning the kitchen. Specifically we were watching a documentary on the miracle of the Holy Light of Jerusalem, with actual footage of the ceremony (rarely seen on tape before the days of the internet). When the Holy Light was seen to emerge from the Holy Sepulcher, it caught Dimitra's attention and she stopped cleaning. I could see her visibly moved by the event, and even a bit troubled, as if she had something to say but didn't know how to say it. Dimitra, though she believed in God, was not necessarily a very devout Christian. Troubled by her conscience, she asked me if she could tell me something that she had never revealed before to anyone else. Though I was only fifteen and she was in her early twenties, she felt like our grandmother and I were probably the only ones that would not think she was crazy for speaking about an event in her life that she could not explain and was truly a terrifying experience for her.
Dimitra proceeded to tell me about her experience that happened not too long before. Her daughter Vivian, who was no more than five at the time, loved icons. Her grandmother, my aunt, would buy her icons, and Vivian would take them and hang them on her bedroom wall. For some reason, this bothered Dimitra, so she took the icons down. Vivian however would put them back up, though again her mother would take them down. It came to the point that Dimitra did this enough times for her to yell at her daughter for hanging the icons in her room, and she took them and put them under Vivian's bed. This saddened Vivian, as the icons remained under her bed.
Soon after, Dimitra went back to Vivian's room to check up on her. When she entered the room, she noticed the lights flicker on and off. This happened a few times when she would go to check up on her daughter, giving her an uneasy feeling. As she went into her own bedroom, suddenly she heard a frightful noise, and then an invisible hand forced her to her bed. Terrified, she struggled to free herself, but couldn't. She tried to yell for help, but couldn't. Understanding this was some evil spirit, she began to anxiously pray the Lord's Prayer and to recite the Creed. When she prayed thus, the invisible force released itself, but if she stopped, the spirit would once again take hold. With anguish she continued to pray and recite the Creed, until finally the malignant spirit departed.
When she asked what we thought of this, we simply told her that this seemed to be a demonic attack for hiding Vivian's icons under her bed. When I asked her if she once again hung the icons, she responded that she did not. My advice then was for her to hang the icons and go to Confession, to make sure something like this would not happen again. Relieved that she was able to take the heavy load off her conscience, she accepted my advice.
As far as I know, she was never attacked again.
John at 12:13:00 PM
Share
‹
›
Home
View web version