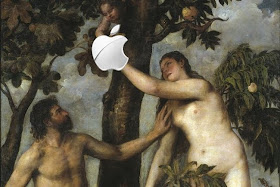 October 5, 2012
Interfax
Some believers in Russia have replaced the logo on devices manufactured by the company Apple purchased by them for religious reasons, but at the same time have no intention of giving them up.
Interfax-Religion has learned that some Orthodox believers, including priests, have replaced the apple logo with images of crosses. They believe that an apple symbolizes the original sin described in the Bible and anti-Christianity, whereas the cross in Christianity symbolizes the Savior's victory over death and the redemption of the original sin.
The first Apple logo featured Isaac Newton sitting under a tree with an apple on it. An advertising agency later developed a different logo for the company: a bitten apple. There are many opinions as to why this logo was chosen, but no official version exists.
In the meantime, a political party called Yabloko (which translates as "apple") has been operating in Russia for some 20 years. It has recently issued a sharp statement against the creation in Russia of a "clerical-police state" with an ideology "represented by a volatile mixture of militant clericalism and obscurantism." The authorities of this policy are deliberately fuelling a conflict between the Russian Orthodox Church and secular civil society," Yabloko said. 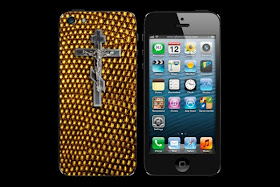 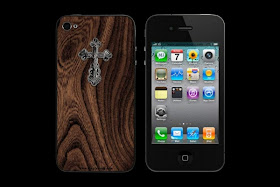 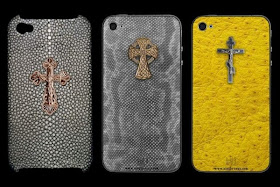 All pictures are taken from the site of the Ukrainian company which specializes in exorcising customizing the Apple products.
Apple's first logo, designed by Ron Wayne, depicted Isaac Newton sitting under an apple tree. However, the logo was quickly replaced by Rob Janoff's "bitten" "rainbow Apple" silhuette that was used from late 1976 to 1998. The monochrome "bitten" Apple logo was used from 1998 to 2003, when it was replaced by glass-themed Apple logotype. From 1976 to 2012 no influential Christian organization has accused Apple of anti-Christian propaganda with the bitten apple silhouette.
At present, the Russian parliament is considering a set of laws designed to "to defend citizens' religious feelings and national and spiritual values from blasphemy and insult". If the laws pass, the ultra-radical Orthodox activists may accuse Apple of anti-religious deeds, which may in the worst-case scenario halt sales of Apple products in Russia, though it seems that their disagreement with the logo is not enough for them to still use the product.
John at 10:05:00 AM
Share
‹
›
Home
View web version