Saint Kuksha of Odessa, born Kosma Velichko (25 January 1875 - 24 December 1964), is a modern saint canonized by Ukrainian Orthodox Church in 1995.
Saint Kuksha was from the family of Cyril and Kharytyna who lived in Ukraine (then part of the Russian Empire) and had many children. In her youth, his mother dreamed of becoming a nun, but married from obedience to her parents. She had two more sons, Theodore (Fedor) and John (Ivan), and a daughter, Maria. In his young years, Kosma made walking pilgrimages to the Kiev Pechersk Lavra, traveled to the Troitse-Sergiyeva Lavra, to the far north Valaam and Solovki monasteries, and to Jerusalem and Holy Land in 1895. Kosma lived in Jerusalem for 6 months and visited all the sacred places in Palestine. On his way back, he visited Mount Athos. Before departing from Athos, the piligrims went to the archimandrite of Saint Panteleimon monastery for a blessing. Kosma expressed his will to join the monks there. The archimandrite consented and told him to return after one year, and gave Kosma a little icon of monastery patron saint, the great martyr Saint Panteleimon. This icon Kosma kept to himself until his death.
After returning to the Russian Empire, Kosma visited Elder Jonah of Kiev, who was widely known for his clairvoyance and wonder-working. The elder was receiving people in the court of the monastery and giving a blessing to everyone. The elder approached Kosma, touched his head with the cross and said: "I bless you into the monastery! You will live on Athos!". Kosma's mother thanked God for her son's decision. 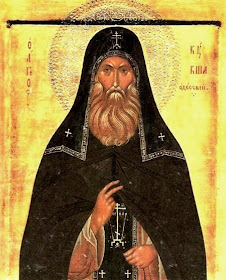 In 1896, at the age of 21, Kosma arrived to Athos and became a novice at the Russian Saint Panteleimon Monastery, and was put in charge of altar offerings (prosphoras).
In 1897, Kosma visited Jerusalem again, this time together with his mother whom he joined on her pilgrimage to the Holy Land. Two remarkable events took place with Kosma while in Jerusalem. When pilgrims were at the Siloam baths, Kosma fell in the water. Though there was a custom among all the pilgrims to bathe there, those who were unable to have children tried to enter first so that God would grant them children. This way people, smiling, started saying that Kosma would have many children. It did really happen: the future saint had a multitude of spiritual children. The second event took place when he was visiting the Church of the Holy Sepulchre. There, pilgrims wished to anoint themselves with the oil from the lamps burning at the Holy Sepulchre. At that moment, the Lord's angel invisibly turned over one of the lamps and the oil poured out upon Kosma. People quickly surrounded Kosma trying to anoint themselves with the oil from his clothes. The event foretold that God's grace that poured upon Kosma so abundantly will be transmitted through him to many people. A year after coming from Jerusalem to Athos, Kosma departed for Jerusalem again. For one and a half years, he served in turn at the Lord's Sepulchre. Having returned to Athos, Kosma was appointed as guest-servant at the guesthouse for piligrims where he served for 11 years.
Soon after Kosma was tonsured a riasophoros with the name Constantine and on 5 April [O.S. March 23] 1904 he was tonsured a monk and given a new monastic name Xenophontos. His spiritual father was Father Melchizedek, who was an ascetic in the mountains. He taught him the basics of spiritual and monastic life. Later Xenophontos used to recollect his life of that time: “I was eganged in monastic tasks till midnight and at 1 a.m. I ran to elder Melchizedek to learn prayer”.
In 1912–1913 a heresy of Imiaslavie (Name-Worship) emerged at Athonite monasteries. Greek authorities demanded many foreign monks to leave the monastery, including Xenophontos, though he had no relation to the heresy. 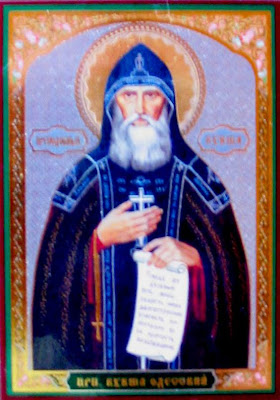 In 1913 Xenophontos settled in Kiev Pechersk Lavra. During World War I (in 1914) Father Xenophontos and other monks worked as a "mercy brother" on the sanitary train on the line Kiev - Lvov for 10 months, then he returned to the Lavra. There he served in Far Caves, kindled the lamps at the relics, redressed the holy relics, and kept cleanness and order in the monastery. He had an ardent desire to enter schema, but was refused being only 40. So once at night, having redressed the relics of Saint Silouan, Xenophontos took them in hand and kneeling next to his shrine he ardently prayed so that Saint Silouan would help him with tonsure into the schema. And so Xenophontos fell asleep by the morning, kneeling and keeping the relics in his hands.
The years passed. At the age of 56, he suddenly fell sick and many thought that he would not survive. It was decided to tonsure the dying monk into schema. On April 8, 1931, when being tonsured in schema he was given the name Kuksha, after the ancient saint whose relics are situated in the Near Caves. After tonsure he recovered.
On April 3, 1934 Father Kuksha was consecrated into the rank of priest-deacon (hierodeacon) and that same year into the ranks of priest-monk (hieromonk).
After the Kiev Pechersk Lavra was closed by the decision of Soviet Ukraine officials, Father Kuksha served at the church in Voskresenksaya Slobodka. In 1938, he was sentenced by the Soviet authorities as a "cult servant" to 5 years of concentration camps in the town of Vilma, in Molotov Oblast (today Perm Oblast), Ural. And after this term ended, Kuksha was convicted to 3 years of exile. This way at the age of 63, Kuksha was in hard wood cutting labors, working 14 hours a day, in cruel frosts, receiving miserable and bad meals. Many priests and monks were imprisoned together with Kuksha. At that time, the post of Metropolitan of Kiev was occupied by Vladyka Anthony, who, along with pieces of dry breads, sent particles of the blessed Eucharist Gifts. In this way, hundreds of convicted priests and monks took communion.
Kuksha was freed from the Vilma camp in the spring of 1943 on the feast of Saint George and was exiled to a village nearby Kungur in Solikamsk Oblast (today northern part of Perm Oblast). After being blessed by the bishop of Solikamsk, he often conducted church services in the nearby village. In 1947 the exile term ended.
In 1947, Kuksha returned to the Lavra and with great joy had been received by the Lavra brethren. In 1951, Soviet authorities transferred Father Kuksha from Kiev to the Holy Dormition Lavra in Pochaev, in western Ukraine. In Pochayev, Kuksha served at the local wonder-icon of Virgin Mary. Besides that, Father Kuksha had to confess people. All who were coming to Pochayev tried to get in for confession with Kuksha. During the course of 3 years, Kuksha conducted morning services at the Cave Temple.
At the end of April 1957, during Passion Week of Great Lent, he was transferred to the Monastery of Saint John the Theologian in Khreshchatyk, Chernovtsi Oblast. There, Elder Kuksha would often repeat "Here I am at home, here I am on Athos". 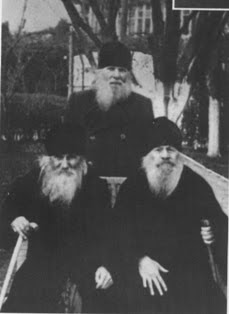 In 1960, Chernovtsi women's monastery was closed and the nuns were transferred to the men's Saint John Monastery in Khreshchatyk, whereas the monks were sent to Pochayev Lavra. The chief archimandrite Michael (in schema Mitrophanos) was appointed as parish priest not far from the village Khreshchatyk, and Father Kuksha was transferred to Holy Dormition Monastery in Odessa. On July 19, 1960 he arrived in that monastery where spent the last four years of his hard life. He was appointed to confess people and to help to take out particles from the sacrifice breads during proskomede - the initial part of the Liturgy. The cell of the elder was next to Saint Nicholas Church.
In October 1964, the elder fell and broke a hip. Lying in such a state on the cold ground, he caught a cold and pneumonia. He never took medicine, calling the Holy Church to be the curer. He foresaw his own death. The spiritual daughter of the elder, Schema-nun A., used to recollect that the elder sometimes said: "90 years and Kuksha will be no more, they will bury him quickly quickly; take the shovels and cover". His words came true. He died when he was almost 90, at 2 a.m. The cross was set over his grave at 2 p.m. in the afternoon of the same day. The Soviet authorities, being afraid of the influx of the believers, gave two hours for the burial. News of the death spread quickly and even Patriarch Alexy I with worry asked why they acted so with the elder's relics.
Blessed Kuksha died on December 24, 1964 and was buried at the cemetery of the Holy Dormition monastery in Odessa. 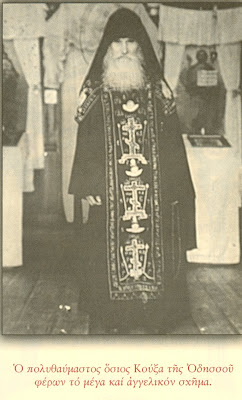 After the collapse of the communist regime in the Soviet Union, Elder Kuksha was glorified as venerable by the decision of the Holy Synod of Ukrainian Orthodox Church in 1995.
The cases of healings done by Saint Kuksha are so numerous that they cannot be all described or counted. He performed them almost daily throughout decades.
Many were healed by his prayer. For example, one woman got cancer, which appeared in the form of a blue tumor on her forehead. In such a state, she came to the elder. Saint Kuksha advised her not to undergo an operation, gave her the rite of confession, and after communion gave her a metallic cross which he ordered her to press against the tumor. The woman did so. After staying with the elder for four days, and receiving communion daily, the woman returned home with her mother. She kept the cross to her forehead, and half way through the trip home, she realized that half of the tumor had disappeared, leaving only white empty skin. After two weeks at home, the second half of the tumor was gone, and the woman's forehead got whiter and cleaner, leaving no trace of cancer.
Saint Kuksha even cured one of his spiritual children without actually seeing her. The woman recovered from a mental illness without seeing the elder, the moment the elder read her letter to him, which requested that he pray for her. Even in autumn 1993, there was a case of woman who got healed (from stomach disease) by soil from Saint Kuksha's grave. In the same way a 72 year old resident of Odessa was healed. There are numerous witnesses, when after rubbing the wounds with abscesses and swellings with soil from the grave of the saint they got healed and cleansed. 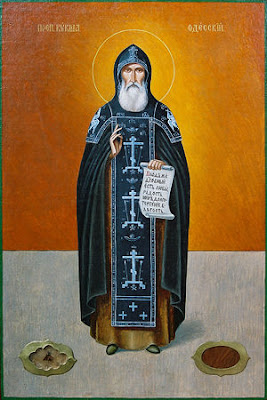 Saint Kuksha had a gift of clairvoyance knowing the hidden things of the heart. He had a gift of spiritual judgment and discernment of thoughts. He was a great clairvoyant. To him the most deepest feelings that people could not understand themselves were discernible and he explained where they are from and from whom. Many were coming to him to tell about their sorrows and ask for advice, and already beforehand was meeting them with the necessary answer and spiritual advice. It happened that when people were standing at his door, he used to call them by name, having not met them previously in life. The hidden things were disclosed to him by God.
Elder Kuksha was very humble and meek, shining with love, patience and compassion. He was never afraid to expose the sinner, not looking at one's rank or position, doing this subtly, with love, in order to awake their conscience and move them to repentance. He had a sincere humility when it comes to wisdom, avoided human glory, being even afraid of it. Therefore he performed good deeds unnoticeable. He very much disliked conceit (self-satisfaction, self-admiration). In a church full of people standing in lines for confession, he used to take the last position and waited.
He used to overcome all the hardships in life by recollection of the Savior's atonement for the human race and His life-giving Resurrection.
Saint Kuksha advised to bless all new things and products with Holy Water, likewise to sprinkle the cell (room) with Holy Water.
Source 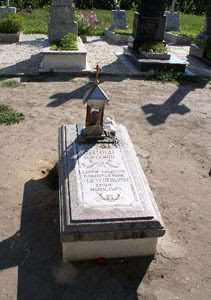 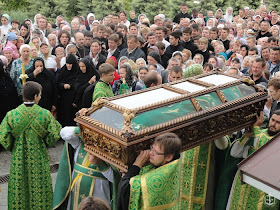 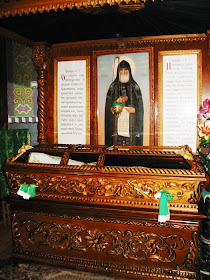