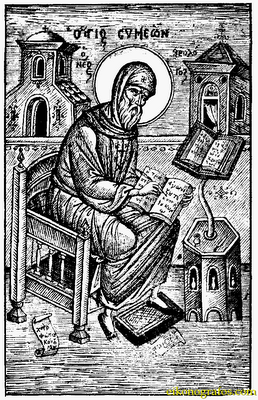 The following story is recalled by a former student of Fr. John Romanides:
Some fifty years ago, when I was a student at the theological academy, our professor of Dogmatics, Father John Romanides, told us a story about his student days at the Theological School of the University of Athens. In order to obtain his doctorate from the University, Father John, a newly ordained priest at that time [the 1950's], had to defend his dissertation before a panel of theological professors. The subject of his dissertation was "The Ancestral Sin" [meaning the sin of our ancestors, Adam and Eve; this is sometimes mistranslated into English as "the Original Sin"]. As various questions about his dissertation were being fired at him from the professors [all of whom had received their credentials at Roman Catholic or Protestant universities in Europe], Father John answered to the best of his considerable ability. Finally, the head of the theological department, the big gun himself, Dr. Panagiotes Trembelas, took aim at Father John, who, as is customary in these interrogations, was standing before the panel of seated professors.
"You have many citations in your dissertation from the writings of Symeon the New Theologian," said Dr. Trembelas.
"That is correct, Sir Professor," answered Father John, with the proper deference.
"You must delete them," continued Dr. Trembelas. "Symeon cannot be cited as a source in your work, because he never received a theological degree."
[Yes, you just read the foregoing sentence correctly.]
Without batting an eyelash at Trembelas' unbelievable remark, Father John answered calmly, "Very well, as you say, Sir Professor. Would you want me to delete also all my references to Matthew, Mark, Luke, and John the Evangelists, since they, too, never received a theological degree? They, too, were not licensed theologians."
Stifled laughter could be heard coming from the panel of distinguished professors.
Source
John at 8:45:00 AM
Share
‹
›
Home
View web version