How Christians Made Halloween A Satanic Holiday 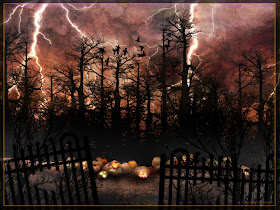 By John Sanidopoulos
When it comes to religion, Halloween was always viewed as a Christian holy day. Beginning with the 1930's through till the 1950's, Halloween was regarded on a secular level as primarily an innocent children's holiday, and there was never a reason to think otherwise. Halloween festivities were mostly limited to school and family activities, and trick-or-treating became a nationwide custom to bring neighborhoods together after they were devastated with childish pranks during the time of the financial collapse of the 1930's. Even horror movies during this time were primarily moralistic gothic tales where good and evil were clearly delineated.
However, the 1960's would bring a new paranoia among American parents, and this was the fear of deranged adults who specifically sought to harm innocent trick-or-treaters. Urban myths through the help of the media began to circulate about razor blades hidden in apples and candy coated in rat poison. In the early 1970's, this fear would become combined with the beliefs of conservative fundamentalist Christians that Satanic cults roamed the country and plotted to kidnap and sacrifice children on Halloween night. In the wake of this, community safety standards were further stressed concerning the practice of trick-or-treat. In some areas, it was required that the children trick-or-treat during the daylight hours, before it got dark. In other areas, trick-or-treating became banned entirely.
It was during this time that fundamentalist Christian concerns about the Satanic implications of Halloween became popularly publicized and even believed in some communities, as demonstrated through the publications of such books as Mike Warnke's The Satan Seller. Even today it is still propagated by such people as the evangelical comic artist Jack Chick that Satanists like to hand out candy that has been poisoned or somehow made dangerous to children. It is also commonly believed among such people that Halloween, being the "high holy day" of Satanists, is the one night of the year that most animals and human children are horribly butchered as "offerings" to Satan. Fundamentalists will say that Satanic power is glorified through the masquerading as "evil" creatures or the decoration of homes, schools, businesses and churches with so-called "occult symbols" (e.g., skeletons, ghosts, Jack-O'Lanterns, etc.). It was claimed that: "Those who oppose Christ are known to organize on Halloween to observe satanic rituals, to cast spells, to oppose churches and families, to perform sacrilegious acts, and to even offer blood sacrifices to Satan." They began to base their opinions on the studies of cultural anthropologists of the 19th century who spoke of the ancient pagan Celts sacrificing children to the god Samhain on Halloween night. These studies have today been debunked.
When Anton LaVey (who did not believe in the existence of Satan) formed the Church of Satan in the 1960's to shock hypocritical Christians, he stipulated three holidays for his version of existential Satanism, the first organized religion to ever label itself Satanic. The first and most important was the Satanist's own birthday. The other two are Walpurgisnacht (April 30) and Halloween (October 31). Both dates were often considered "witch holidays" in popular culture by way of influence from Christian fundamentalists and thus were linked with Satanism. LaVey adopted Halloween less because of any inherent Satanic meaning in the date and more as a joke on those Christians who had superstitiously feared it.
The unfounded beliefs of Christian extremists were further perpetuated during the "Satanic Panic" of the 1980's, during which a number of hypnotized mental patients claimed to have been "ritually abused" as children by Satanists, and their respective psychiatrists actually believed them (apparently throwing out all their training in skepticism in favor of monetary advancement through sensationalism).
One particularly distressing example of this mentality is what happened in the town of Jamestown, New York in the year 1987. People in the town began to believe that a number of teenagers who had held a Halloween party in an abandoned warehouse were actually involved in a secretive Satanic cult, and that they had been sacrificing animals at the party. The religious community, outraged, began flooding the local newspaper with letters explaining their concern about the growth of "Satanic activity" in the area. The humane society began receiving phone call after phone call, each informing them of various dogs and cats that had supposedly been ritually slaughtered. People actually began to walk the streets of the town at night, ready to beat up any "Satanists" that were supposedly running around after sundown. The kids who had been at the Halloween party also received various threatening phone calls. After an extensive investigation, it was found that there was absolutely no Satanic cult running around in Jamestown, and that there indeed had never been. The teenagers in the abandoned warehouse were no more than kids with strange clothes and haircuts, and no evidence of any animal mutilation was ever found.
But despite the foolishness of fundamentalist Christian propaganda against Halloween, the holiday is still a highly popular event on many people's calendars. It has become a mostly secular holiday for the majority of people, to which there is not much more than dressing in costumes, eating candy and watching scary movies. Horror movies have indeed become an extremely important Halloween franchise, most especially since the release of John Carpenter's Halloween in 1978. The movie depicted a demon-like killer stalking an average American neighborhood on Halloween. The fact that this was the first movie associating Halloween with horror should be telling, even though the golden age of horror films were in the 1930's and 1940's. It simply exploited the paranoia and fears that began in the 1960's.
Read more at my Halloween Resource Page.
John at 11:31:00 AM
Share
‹
›
Home
View web version