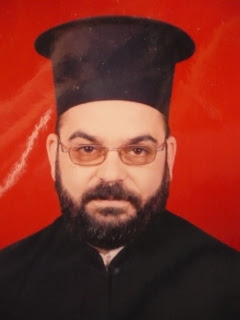 October 25, 2012
Los Angeles Times
A Greek Orthodox priest has been found slain after being kidnapped near the Syrian capital of Damascus, the Syrian government and the Vatican news service reported Thursday.
The body of the Rev. Fadi Jamil Haddad, pastor of St. Elias Church in Qatana, outside Damascus, was discovered in the Jaramana district of the capital, reported Agenzia Fides, the Vatican news service. The site was not far from the area where he was kidnapped by an “unidentified armed group" last Friday, the agency said.
The Vatican agency quoted a colleague saying the priest had been “horribly tortured.”
The official Syrian news service said the priest was found with a gunshot wound to his head. The government news agency blamed the crime on “terrorists,” its usual characterization of the armed opposition fighting to oust President Bashar Assad.
According to the official account, the priest was abducted while seeking the release of another person who had been kidnapped by militants.
But it was not clear if the priest’s slaying was political, sectarian or criminal in nature. Many Syrians have complained of a breakdown in law and order and a spike in kidnapping for ransom and other crimes as security has deteriorated. Opportunistic criminals have moved to take advantage of the nation's security void.
The Vatican news agency reported that the priest’s kidnappers had demanded a ransom equivalent to about $715,000 for the priest’s release. “It was, however, impossible to find the money and meet this exorbitant demand,” reported Agenzia Fides.
The Greek Orthodox population is considered the largest Christian denomination in Syria, where Christians represent perhaps 10% of the population. Syria is overwhelmingly Muslim.
Christian leaders in Syria say their community, which has ancient roots, is in a precarious position. Some Christians have joined the rebellion and called for Assad to step down. But many Syrian Christians back Assad, whose administration has been tolerant of religious minorities even as it has crushed political dissent.
Assad has tried to rally support among Christians and other minorities against the armed rebellion, which is led by the nation's Sunni Muslim majority. There have been reports from Syria of government efforts to arm Christian communities. But some Christian leaders have urged their co-religionists to remain neutral in the conflict.
Some Christians voice fears that Islamists will take over the secular Syrian government and that the nation will experience the kind of sectarian violence, including the bombing of churches and torching of Christian shops, that ravaged neighboring Iraq after the U.S.-led invasion toppled Saddam Hussein. Hussein, like Assad, was a secular autocrat who tolerated Christian religious practice. Tens of thousands of Iraqi Christians fled to Syria in the aftermath of Hussein’s fall.