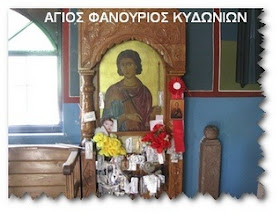 By John Sanidopoulos
In Aivali (Kydonia) in Asia Minor, across from the island of Lesvos, there was a small church dedicated to St. Phanourios, built well before the time of the Asia Minor Catastrophe of 1922. Within this church was an old wondwerworking icon of St. Phanourios.
August 27, 1922, the feast of St. Phanourios, would mark the last time the oil lamps in this church would be lit by a woman who was unaware she was lighting these lamps for the last time, but who later would save the icon from the impending disaster.
On August 29, 1922 the Greek army abandoned Aivali and allowed the Turks to take over. Kydonia was 95% Greek at the time, and since they had no problems with the Turks in the past few years they decided to stay in their homes and hope for mercy. They figured that if they welcomed the Turks with gifts and warmth then they would be safe. After all, they figured, the Koran does say not to kill a person who receives you with honor and as a conqueror. However there was a tremendous hatred towards the Greeks. Kemal wanted the complete obliteration of Greeks and Armenians from Asia Minor. Leaders decided therefore to have all Armenians and those who fought in battle to flee.
On the 5th of September the last ship with the Greek army left Asia Minor and the next day the Turkish army was to enter Aivali. They were to be received with music, food and gifts. However the Turks were informed that the Greeks were storing weapons in Aivali. The Turks came in and began the destruction of ecclesiastical and political structures. That same night they were selling ecclesiastical items at a bazaar in the port. Fear and terror obliterated the hope of the Greeks that night.
Men were gathered by the Turkish army for execution, but they needed to receive orders from Kemal to proceed. Kemal stopped the execution on the basis that the Greeks received them warmly. The Greek plan worked for about 24 hours.
On September 7th the Turkish army left and the militia entered. They ignored the command of Mustafa Kemal on grounds that the Greeks stored weapons and soldiers, and they began a slaughter. Men between the ages of 18 and 45 were gathered and taken out of the city to the mines of Freneli and two adjacent canyons. They took them to a hill named Bogia and slaughtered them with machetes.
Metropolitan Gregory was warning the people from mid-August that a slaughter was coming. He had been arrested twice by the Turks and knew of their hatred for the Greeks and Armenians. From that time he was organizing kayaks and ships to take the people to nearby Lesvos for safety, which he did till mid-September. In the end, he managed to save thousands of lives this way.
During the days of slaughter, mothers hid their children from Turks who would enter the houses to kill and rape. They would burn off the eyebrows and cut the hair of their sons. They would put on them eyeliner, perfume and dress them like girls. Girls they would stuff their clothes to make them appear pregnant, and would cut their hair and spread dirt on their face to make them look old.
On September 18th the Turks gave the people of Kydonia 24 hours to leave for Lesvos. Their hopes were placed on Metropolitan Gregory to organize for their departure through kayaks and Greek and American ships. Mothers took their children to the ships for salvation. At one point, Turks saw an 18 year old boy dressed as a girl board the ship, and they immediately took him and killed him in front of his mother.
On September 19th a woman left her home with her son for the kayaks. As she passed the Chapel of St. Phanourios she saw the oil lamp was lit, and wondered who in this chaos did such a thing. She was pulled to go in and venerate the icon for the last time. The icon was full of gold and silver offerings, owing to its wonderworking nature. This icon had become famous all the way to Smyrna because of its many miracles.
The woman decided to take the icon with her, knowing full well that the Turks did not allow the taking of any valuables, including icons, onto the ships. She hid it under the clothes of her child and left.
When she arrived at the ships the Turks checked her for any valuables, and found under the clothes of her child the icon of St. Phanourios. The Turks saw this to be an especially valuable icon, so they took it and put it with the other treasures. But the woman was filled with love for St. Phanourios and could not bear to see this. She decided to give her only possession, a ring, in return for the icon. The Turks agreed to the trade. She was given also another small icon. She took these and boarded the kayak for Lesvos.
The woman aged and her son grew up and got married in Lesvos. He left with his bride for South Africa where he gained riches. He eventually died and his childless wife gave her riches to philanthropical works and to the Church. She met with the priest of St. George the New Martyr in New Kydonia, Lesvos and gave him the icon of St. Phanourios to which he was commissioned to have a church built to house the icon. This was done and it was consecrated in 2002.
Today this church dedicated to St. Phanourios is at the Church of St. George the New Martyr in New Kydonia and houses the wonderworking icon of St. Phanourios together with its gold and silver offerings. From this church one could see old Kydonia across the sea.
John at 10:18:00 AM
Share
‹
›
Home
View web version