The Hellenic Orthodox Community of Lebanon 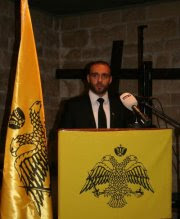 Interview with the Founder and President of the Orthodox Party in Lebanon, Rodrigue (Dimitri) El Khoury, by Antonia Patsidou
1) The Hellenic Orthodox community in Lebanon, lists over 3,000 Hellenes-Greeks. The Hellenic speaking regions of the country are mainly concentrated in the capital Beirut, and in Tripoli, at North Lebanon. Give us more details on the Hellenic community of Lebanon.
That the Hellenic Orthodox community in Lebanon lists over 3000 Hellenes living in Lebanon, is a wrong idea. The true number is about 300,000 and we are 7-8% of the population, and the fourth biggest community in Lebanon, after Sunnis, Shiits, and Maronites. The number 3000 represents those who have “Greek nationality” from the new Greek state, and those who came to Lebanon from Greece after 1920. But those who have “Hellenic roots”, those who once spoke Greek, those who are named “Rum”(in the Arabic language) are now more than 300,000.
When the Arabs occupied our land in 634 A.D, they called our land “the land of al-Rum” and the first Arab historian al-Wakidi from the 8th century noted that in every Syrian and Lebanese town, the Arab invaders were obliged to talk with our ancestors (al-Rum), in the “Greek language” (lougha Rumia). The same as the Turks after them, they called Greeks “Rum” and the Greek language “Romaic”. After 1400 years of Arab invasions, we are totally Arabized, but we keep our name, “Rum”, and we keep the Greek language in the liturgies. And you should know that the Greek Orthodox community, and the Greek Catholic community (Uniates) have the same roots, and the Greek Catholic community now are about 190,000 in Lebanon. And don’t forget that many Greek philosophers and saints are from Antioch (Saint John Chrysosotom, Saint John of Damascus, Saint Romanos the Melodist, etc.).
2) The Hellenes in Lebanon, although they speak Arabic, keep in their thoughts that they are Greeks, and are forced to accept the Arabism. But what about the propaganda that was made ​​by the political parties trying to convince them that they are Orthodox Arabs or Syrians, but not Hellenes. What exactly happens with this issue?
We still call ourselves “Rum”. In the old Arab manuscripts the name “Rum” in our country means “Greek people”, and the term “lougha Rumia” means “Greek language”. And we are here, many centuries before the Arabs. Papadopoulos, in his book The History of the Antichian Church, says: “The majority of the Antiochian church was Greek” (page 51). And about the Arabization, he says in the same book, “The persecution has been intensified since 773 … The Calipha al-Mansur … prevents the teaching of the Greek language to children. Since that time, the Christians, especially the Orthodox Church, were obliged to translate books into Arabic … and this is what precipitated the Arabization of the Greek people” (page 570, 571). The propaganda of the political parties, influenced by the Muslims, nowadays say to all people that they are “Arabs", and the Christians are from the Arab tribes, which is not the truth. They teach this wrong idea in schools (Syria), and in Lebanon many of the people repeat this wrong idea without any historical references, and without searching the historical truth. The propaganda of the Maronite parties say to our “Orthodox youth” that we are all Christian “Syriacs”, not Hellenes, and the “Rums” were invaders, as the “Arabs”. And many members of the “Rum” population repeat this idea without any awareness, influenced by the strong Maronite media. The truth is: in this land there once existed many nations-communities. The Syriacs (Maronites), the Hellenes (Rum), and the Arabs (Muslims). We should accept the “plurality” of this area, because it is the “historically true one” not the “ideological one”. 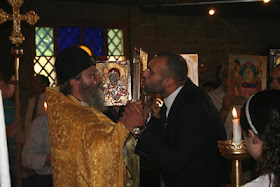 3) The Greek Orthodox Youth of Lebanon are the descendants of the Greeks of Antioch, namely they are Greeks from the Hellenistic era. There is an effort on your part to found a political party for the Greek Orthodox community. What are the objectives of the party?
Only by insisting on this “plurality” can we save our community from being absorbed. The Lebanese regime is a sectarian regime. We have 128 deputees, 64 must be Muslims, and 64 must be Christians. 14 deputees is the quote of the Greek Orthodox community. The Vice Prime Minister also must be a Greek Orthodox. Every community in Lebanon has its own political party, that’s why they are strong in politics. The Maronites have their political parties (kataeb, the Lebanese forces, the fpm, and the marada), the Sunni community has the “future movement” and the Islamic organizations, the Shiits have the Hezbollah and Amal, the Druze have their parties. Even the Armenian community (1%) of the population is strong in political life and they can have their own representatives in the parliament and the government, because they have their own party. The Greek Orthodox community (7% of the population) has 14 deputees, none of them have “a Greek Orthodox” speech, no one of them come from “a Greek Orthodox” party. The leaders of the other communities elect OUR representatives, that’s why our Orthodox deputees speak of the interests of the other communities. To satisfy the “Maronites leaders” or the “Muslim leaders” to elect them another time in there electoral regulations. We have to organize ourselves in a political party to strengthen our political presence, not only in Lebanon, but in Syria too and in Jordan. We have to organize ourselves in a political party to save our historical identity, the “Byzantine-Hellenic” identity. In this way there will be no more absorbing our youth in the other’s political ideologies. That’s why we have to teach the Greek language to our youth, we have to make conferences about this historical identity, and this year we made the first “liturgy in the east” commemorating the fall of OUR City (Poli) Constantinople, to keep our historical identity alive. In our speech we said: "Hagia Sophia is ours”, and we made this liturgy with greetings from the Greek Orthodox of Antioch and all the East to our Ecumenical Patriarchate, saying: "Our Patriarch of Constantinople is an ecumenical authority, any violation to his rights is an offensive act against all the Orthodox people in the world”. And for the first time we talked to the Lebanese media about this cause and this historical event.
4) Since the civil war started in Syria, thousands of Christians have been killed by Muslim mujahideen guerrillas. Many of them are Greek Orthodox Christians, mostly Hellene Macedonians and Hellenes of the Byzantine period. What is your information on this issue?
Our Greek Orthodox community in Syria live in a dangerous situation. The Islamic fundamentalists nowadays, supported by western “stupid” politics, attack many old Christian monuments, especially in Homs Emesa, the town of the big Greek Saint Romanos the Melodist. Nowadays 130,000 Greek Orthodox are displaced from this town to the Alawite area or at Lebanon. They attack our brothers there, and threaten them, and the western media support these fundamentalists without asking the Greek Orthodox population of Syria if it will be better for them to restore an “Islamic fundamentalist regime”. I can say, even in Syria, only by creating a Greek Orthodox political party can we save our presence. Not to be used by the others conflicts - 13% of the Syrian population is Greek Orthodox, more than 1,200,000. By founding a political party for this big community, you can imagine what an influence we will have. We will be more strong and we can say: our party, our community will never be involved in your conflicts. We have our rights and we are here to take them by creating this party. We can make the convergence between all the communities. And we can defend OUR rights.
5) What message would you like to send in Greek to your brothers in Hellas?
We are proud of our Greek ancestry. Do not forget that here in the East, you have Greek brothers, and WE LOVE YOU. We are the Acritan temples [Acritans were the Byzantine border guards] and we will keep the flame in our hands, the flame of Hellenism and Orthodoxy.
Source: Edited by John Sanidopoulos
John at 11:16:00 AM
Share
‹
›
Home
View web version