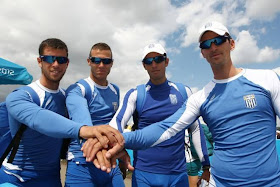 By John Sanidopoulos
Good news came to the Greek people when the Men’s Four Sculls Coxless rowing team qualified for the finals this Saturday. They ended second in their category with the time 6:02.61 after USA (6:01.72) and before Germany (6:04.61). These four men are Stergios Papachristou, Yiannis Tsillis, Giorgos Tsialas, and Yiannis Christou.
After their victory, Stergios Papachristou said: "This is the first time in a heavy category that Greece enters the finals at the Olympic Games. I want to mention Father Joseph of Mount Athos. He sent a letter with wise words, which we had with us today and it helped us a lot. We believe in God, we believe in people who are near us. We will give it all now in the finals." 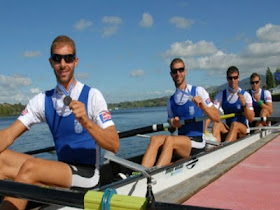 Below is the letter which Fr. Joseph wrote the athletes: 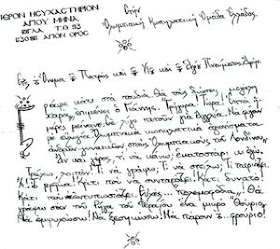 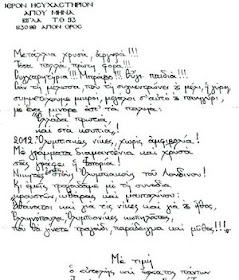 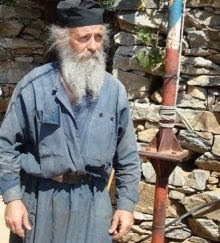 Fr. Joseph, an ascetic from Mount Athos of the Hermitage of Saint Minas, is the spiritual father of the female Olympic rower Christina Giazitzidou. His letter is full of encouragement for the Greek athletes. It ends with the following words: "Children of Greece, immortal for both your victories and ethos, Olympic rowers who will become songs, examples and myths!!!" 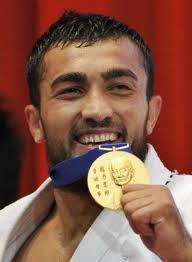 Ilias Iliadis put aside his disappointment at missing out on a judo gold medal at the London Olympics and said he hoped the bronze he won on Wednesday will bring some joy to those suffering in crisis-hit Greece.
"Really I am happy for this medal because Greece needs this medal at this time. Greek people need this medal," he told Reuters. "Everybody knows about the hard times in Greece. I want to say thanks to everybody in Greece who was watching my fight. It would have been good if it was gold but no bad thing that it's bronze."
When Iliadies was asked by Greek reporters to whom he dedicated his metal, he said: "I dedicate it first to God, then to all the Greeks." Iliadis went on to say: "I thank God! This metal will go to Mount Athos."

Two months before winning the bronze medal in London, Ilias visited the Holy Monastery of Vatopaidi on Mount Athos, in order to "receive strength from the Panagia". He told Pemptousia in an interview that he would give his medal if he won to the Monastery as an offering to the Panagia. In the interview he also speaks of judo, athleticism, his love for Greece, his deep Orthodox faith, and his time living in Georgia. (see video here)
John at 11:32:00 AM
Share
‹
›
Home
View web version