The Feast of Transfiguration in Bulgaria 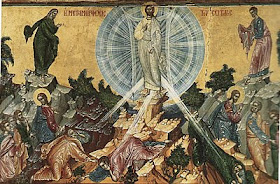 On August 6 the Bulgarian Orthodox Church celebrates the Transfiguration of Jesus Christ (Sveto Preobrazhenie Gospodne).
According to the Church, this is the day that Christ strengthened the belief of his disciples in his holy origin by transfiguring himself in front of the eyes of Peter, James and John. On this day people pick the first grapes and give them out to relatives and neighbors. According to folklore beliefs, on Preobrazhenie the "summer turns" and starts approaching the autumn and, respectively, the cold weather.
Orthodox Bulgarians also take grapes to church to sanctify it and give them out for health and fertility during the next year. People believe that when God created the grapes, the Devil made the blackberry, called by the people "devil's grapes". The Devil did so that it ripened earlier than the grapes. That is why it is unlucky to eat blackberries on Preobrazhenie. The good Christian tastes first the fruit of God and only after that he can eat blackberries without fear.
According to folk belief, on this day the sky opens up and if you are to see this, all your wishes will come true. And if anyone is to fall ill, he would soak some dried fruit and drink the water - the illness will be cured.
The colorful rituals connected with Preobrazhenie are still alive in hamlets and villages across Bulgaria. On this day, fairs are held and livestock and goods exchanged. In the past unmarried girls and men would arrange betrothals and weddings. According to tradition going back to antiquity, weddings would take place in September, so that the child may be born in June and the bride could get down to work during the summer period. 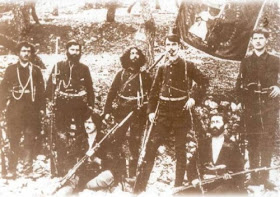 Preobrazhenie is also an important day in Bulgarian history as it is when the Adrianople vilayet joined the Ilinden-Preobrazhenie Uprising of 1903.
The uprising occurred when Bulgarians in Macedonia and Thrace rebelled trying to unify the country as large swaths of territories populated by Bulgarians were left in the Ottoman Empire at the Berlin Congress of 1878.
The Uprising was an organized revolt against the Ottoman Empire prepared and carried out by the Bulgarian Macedonian-Adrianople Revolutionary Committee
The Adrianople vilayet joined the uprising on 19 August 1903 in the Gregorian Calendar, which corresponds to 6 August of the Julian Calendar.
Although the rebellion in both regions was initially successful, the intervention of the Ottoman Turkish regular army led to the dissolution of the rebels' detachments. Some 25,000 badly armed rebels faced 300,000 Ottoman troops.
By the time the rebellion had started, many of its most promising potential leaders, including Gotse Delchev, had already been killed, and the effort was quashed within eleven days. The survivors managed to maintain a semi-successful guerilla campaign against the Turks for the next few years, but its greater effect was that it persuaded the European powers to attempt to convince the Ottoman sultan that he must take a more conciliatory note towards his Christian subjects in Europe.
Source
John at 4:41:00 PM
Share
‹
›
Home
View web version