Patriarch Bartholomew Against Hagia Sophia in Trebizond Becoming a Mosque 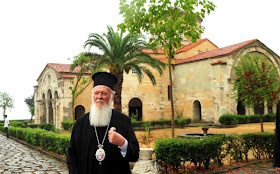 August 17, 2012
AsiaNews
There is "no need" to transform the ancient church of Hagia Sophia in Trabzon into a mosque, it is better that it remains a museum open to all religions: Bartholomew I, Ecumenical Patriarch of Constantinople, expressed with clarity his opposition to the idea supported by the Deputy Turkish Prime Minister, Bulent Arinc who would like to turn this monument of Christianity into an exclusive place of worship for Muslims.
The church of Hagia Sofia (Saint Sofia) is a gem of ancient architecture and dates back to the era of the Comnenus Emperors (1204-1461). It testifies to the ancient presence of Christians from Pontus on the Black Sea, wiped out as a result of various genocides and purges first by the Ottomans, then by the neo-Turks.
Yesterday, the Ecumenical Patriarch visited the church and met with the mayor of the city, Genc. In front of reporters, Bartholomew said: "We respect all mosques and all places of worship, but in this case - turning Hagia Sophia into a mosque - I see no need for worship."
He added: "We are in favor of maintaining the church of Hagia Sophia as a museum. Moreover, as stated by the head of the local [Islamic] community [here] there are already many mosques to meet the needs for worship of the faithful, and they remain largely partially empty."
The Patriarch recalled the recent statements by the President of the Muslim community of the place, Zeki Baytar, who reacted strongly to the Arinc proposal, even threatening a revolt, and said: "First we must fill the mosques, then, if necessary, transform Saint Sophia into a mosque."
"If Hagia Sophia in Trabzon is converted into a mosque - continues Bartholomew I - it will be made available only to our Muslim brothers. Conversely, if it remains as a museum, it can offer its services to the entire international community, with sizeable profits for its inhabitants."
Among the journalists present, many remember the words of the same Bulent Arinc during his visit to the Phanar - the seat of the patriarchate - in January 2011: "As a government we have a duty to meet the needs of these citizens who have a centuries old presence in these lands."
Therefore, the position of the Ecumenical Patriarch is hardly surprising. What is of wonder however, is the Turkish government policy towards minorities of "one step forward, one step back", depending on the circumstances and political conjunctures. Precisely for this reason anti-conformist courageous groups voicing anti-conformist sentiments are on the increase in Turkey.
Trabzon, in the far north-east of Turkey, is inhabited by a population of almost 300 thousand inhabitants. Of these few are Christians. On 5 February 2006, Italian priest Andrea Santoro was murdered by a young nationalist Islamic.
John at 11:07:00 AM
Share
‹
›
Home
View web version