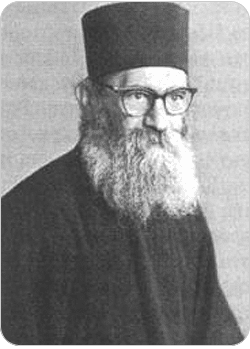 Elder Germanos was born in the Cypriot village Avgorou of the eparchy of Ammochostos (Famagusta) in 1906 of pious parents Nicholas and Margaret, of the Hatzigeorgi family. Reading the life of Saint John the Hut-Dweller when he was young, he was inspired to make the decision to follow the monastic life.

At age 16 he entered the Stavrovouni Monastery. He showed exemplary zeal and noteworthy obedience as a novice monastic. He received the prayer to wear the cassock at age 24 and from his original name George was renamed Monk Germanos. He was ordained a Deacon the following year. He was tonsured a monk of the Great Habit at age 29 and was ordained a Hieromonk (Priestmonk) at age 38.

The purity of his life, his proven prudence, and administrative abilities served as the main cause for his election to abbot in the year 1952, when the abbot till then, the ever-memorable Elder Dionysios II, reposed. As abbot he was the first to set an example: first in guilelessness, in forgiving, in meekness, in patience, in service, in diligence, in silence, in participating in the Sacred Services. He very diligently cultivated ceaseless prayer in his soul.

One of his chief virtues was conscientious obscurity. He avoided any projection of himself towards the outer world, but also towards the people around him. He strove to hide his virtues with every diligence; for this reason as a rule very few were able to recognize the invaluable treasure hidden beneath his plain appearance. His ceaseless prayer with tears, his angelic standing before the dreadful Altar of the Lord during the time of the Divine Liturgy, and the unique and unrepeatable example of his whole life gave forth a most wealthy spiritual fruitfulness, not only in his own Monastery, but also in the female Monasteries of Cyprus, which blossomed and were supported thanks mainly to his own struggles. 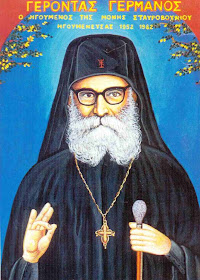 He was an excellent Confessor and Spiritual Father, and guided a multitude of people to repentance and to genuine spiritual conversion to the Lord. His whole life was a real living witness of the living Jesus.

His earthly life was sealed with a martyric end. On the afternoon of August 31, 1982, on the last day of the Ecclesiastical Year and a day dedicated par excellence to the Panagia, whom the venerable Elder exceedingly venerated, while he was returning from a hard day's work in the olive fields, driving the tractor of the Monastery, he fell into a steep valley, where he found, on his own and unaided, a martyric death. With the end of the Ecclesiastical year the blessed Elder reposed, a genuine ecclesiastical personality, whose life essentially was a constant sacrifice, a ceaseless service. Undoubtledly he was transposed to the Altar above, where the unending Liturgy is served. The monks, who looked for him persistently all that afternoon, finally found him the next day, dead and in a prayerful position, with his feet and hands crossed, this also being a visible sign of his spiritual work, even during those last painful moments of his martyric death, which like the pains of childbirth, introduced him to eternal life.

"Do you want to not sin? Always remember your death!" - Elder Germanos