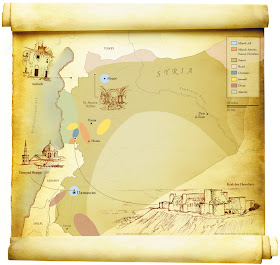 In the land of St. Paul's conversion, ancient Catholic and Orthodox communities are finding themselves on the wrong side of an increasingly sectarian conflict.
Bill Spindle and Sam Dagher
August 11, 2012
The Wall Street Journal
Near the Syrian city of Aleppo, the Church of St. Simeon the Stylite commemorates the 5th-century ascetic who became an ancient sensation by living atop a tall pedestal for decades to demonstrate his faith. Krak des Chevaliers, an awe-inspiring castle near Homs, was a fortress for the order of the Knights Hospitaller in their quest to defend a crusader kingdom. Seydnaya, a towering monastery in a town of the same name, was probably built in the time of Justinian.
A nun there spoke about Syria's current crisis from within a candlelit alcove this week, surrounded by thousand-year-old votive icons donated by Russian Orthodox churchgoers and silver pendants in the shape of body parts that supplicants have sought to heal—feet, heads, legs, arms, even a pair of lungs and a kidney.
"It's not a small thing we are facing," she said, speaking as much about the country as her faith. "We just want the killing to stop."
Few places are as central as Syria to the long history of Christianity. Saul of Tarsus made his conversion here, reputedly on the Street Called Straight, which still exists in Damascus. It was in these lands that he conducted his first missions to attract non-Jews to the nascent faith.
A century ago, the Levant supported a population that was perhaps 20% Christian. Now it is closer to 5%. Syria today hosts vibrant, if dwindling, communities of various ancient sects: Syrian Orthodox, Syrian Catholics, Greek Orthodox, Greek Catholics and Armenian Orthodox.
But Syria's Christian communities are being severely tested by the uprising that has racked the country for more than a year. They think back to 636, when the Christian Byzantine emperor Heraclius saw his army defeated by Muslim forces south of present-day Damascus. "Peace be with you Syria. What a beautiful land you will be for our enemies," he lamented before fleeing north to Antioch. In the 8th century, a famed Damascus church was razed to make way for the Umayyad Mosque—today one of Islam's holiest sites.
Not a few Christians in modern-day Syria worry that the current crisis could end the same way for them if Bashar al-Assad and his regime are defeated by the rebel insurgency.
In many ways, it is an odd concern. Christians and Muslims have lived side-by-side with minimal friction during the decades of Assad family rule. Historically, local Christian communities have sometimes even welcomed Muslim overlords when they freed them of heavy-handed rule from Constantinople or Rome. In many places the two groups continue to reach out to each other even now. Even rebel extremists say that they don't have anything against Christians, either.
Yet as the conflict inside the country takes on ever-stronger sectarian overtones, as Christians largely side with the regime or at least decline to actively oppose it, some of the oldest Christian communities on earth are feeling squeezed.
"We have been leading a life that has been the envy of many," says Isadore Battikha, who until 2010 served as the archbishop of Homs, Hama and Yabroud for the Melkite Greek Catholic church. "But today fear is a reality."
Father Battikha is among the many staunch supporters of President Assad in the Christian church hierarchy.
From the very start of the current conflict, history and religion have played a key role in fueling passions on both sides in Syria. And this has become more pronounced as the conflict dragged on, turning bloodier and more vicious.
One of the oft-repeated assertions made by the Syrian regime plays effectively on ancient rivalries. The conflict, it says, is an attempt by neo-Ottomans in Turkey and expansion-minded Muslim ultraconservatives from Saudi Arabia—known as Wahhabis—to gain a foothold in Syria.
This narrative, one of majority Sunni Muslims overwhelming and dominating minorities, is now a staple of nightly news bulletins on Syrian state television. The regime knows well how this message resonates with Christians and other minorities.
The Ottomans, Turks who ruled Syria from 1516 until World War I, relegated Christians to a second-class citizen status. They were allowed to practice their religion and govern themselves in matters that didn't concern the Muslims. But they were also required to pay special taxes, and there were plenty of restrictions on them when it came to interactions with Muslims. Wahhabism, the ascetic and harshly conservative form of Islam practiced in Saudi Arabia, is even tougher on Christians.
Rebels have made it easy for the regime to play on fears such as these. In an effort to inspire their own fighters and curry favor with foreign backers—primarily Saudi Arabia and Qatar, the only other country where Wahhabism is the state religion—some frame the conflict as a struggle to restore the glories of the Islamic caliphates and redeem Syria from the rule of the infidels.
This clearly comes through in the names adopted for the brigades of the Free Syrian Army—the loosely linked grouping of local militias and army defectors. Many of the militias are named after figures revered by Sunni Muslims like the third Caliph Umar ibn al-Khattab, whose main title was al-Farouq, meaning "distinguisher between truth and falsehood," and the Islamic warrior and military commander Khalid ibn al-Walid.
It was Ibn al-Walid, fighting for the Caliph Umar, that defeated Emperor Heraclius in 636 during the first wave of Muslim conquest to come from the Arabian Peninsula in the years after the death of the Prophet Muhammad.
The main target of the most sectarian-minded rebels isn't Christians. It is the Alawites, the minority group to which the Assad family belongs. Alawites, who make up about 12% of Syria's population, about the same as Christians, are a heterodox sect that branched off from Islam. They are considered by Muslim extremists to be heretical, far worse than Christians. 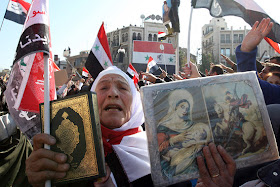 Nonetheless, many Christians fear any government that replaces the Assad regime might be dominated by groups like the Muslim Brotherhood that could relegate them back to second-class status. They also worry their communities could be devastated in the crossfire between Syria's largely Sunni Muslim insurgency and the well-armed Alawite regime, just as Christians in neighboring Iraq have suffered mightily in the sectarian wars there over the past decade.
The expansion of the conflict to Syria's two biggest cities, Damascus and Aleppo, has amplified the fears of the Christians. They are under pressure from both the regime and rebels to take sides and make their allegiances known. Those who want to avoid taking sides are leaving.
For the time being many Christians, like Muslims and other refugees, have relocated to areas where they feel safer within Syria or in neighboring Lebanon. So far, the pattern in neighboring Iraq—where many Christians have left for good to Western countries—hasn't emerged.
The clearest examples of Christians taking the side of the regime have been in Homs. In the town of Qusayr, southwest of Homs, one Christian family helped aid the security forces by taking up arms and manning checkpoints. The result was a backlash against all Christians there, and the town has largely emptied of Christians since then.
In Wadi al-Nasara—the Valley of Christians, another enclave of some 30 villages west of the city of Homs—a family of pro-regime Christians has fought alongside Alawite loyalists, say residents who recently fled the area. Pro-regime Christians commandeered two palaces in the scenic valley that are owned by Gulf Arab diplomats, they said.
Nearby, Sunni fighters have made a base in the landmark 12th-century Crusader-era castle Krak des Chevaliers. "It is now impossible for a Muslim to come down to the valley," said a resident of the area.
Father Paulo Dall'Oglio, an Italian Jesuit priest who lived in Syria for three decades but was expelled by the regime in June, says many members of the church have long-standing ties with the regime and intelligence services that have shaped their stance.
"Many Christians in Syria believe that there's no alternative to the Bashar Assad regime," says Father Dall'Oglio.
Some Christians, though, are striving to bridge that divide, attempting to reach out to the opposition and rebels, or at least cross the sectarian gulf that increasingly separates them.
Basilios Nassar, a Greek Orthodox priest from the central city of Hama, was shot and killed by government snipers in January while he was helping evacuate the wounded in clashes in one neighborhood, Christian activists say.
They say the snipers probably mistook him for an Islamist fighter because of his beard and black robes. His church said he was killed by "an armed terrorist group."
Caroline, a Christian activist who asked to be identified by only her first name, was arrested by security forces in April in Damascus while distributing chocolate Easter eggs to the children of Christian, Sunni and Alawite families displaced by the fighting in Homs.
Paper strips bearing passages from the Quran and the Bible were attached to the eggs. Caroline said this act was part of her attempts to chip away at the barriers now separating Syria's religious groups because of the conflict.
Previously she made it a point to assist the wives and children of men killed in fighting in the predominantly Sunni town of Douma outside Damascus, handing out food provisions and cash envelopes.
She had also sought meetings with church leaders to ask them "not to impose one position on all Christians." She said the majority either scolded her for being against the regime or refused to meet with her.
Father Nawras Sammour, a 44-year-old Jesuit from Aleppo, runs a nationwide relief program known as Jesuit Refugee Services. The group is currently providing assistance to 6,000 Syrian families across the country who are displaced by the violence—Sunni and Shiite Muslims, Druze, Alawite as well as Christian.
He believes only by reaching out across religious divides will Christians continue to be a vibrant presence in these ancient lands. He recognizes the challenges, and says he understands Christian concerns.
"Look at Iraq, look at Egypt," he says, listing neighboring countries where political upheaval and the replacement of an authoritarian ruler with an Islamist resurgence has pummeled long-standing Christian communities. "But despite this we have to build bridges. These are the principles of the gospel. We can't just pick a side and go with them."
Alexander Haddad, a 66-year-old resident of the mountain hamlet of Maalula, is concerned about the fate of his ancient Christian community, but he takes the long view. Like other residents of the town, he speaks a variant of Aramaic, the language used by Jesus himself.
"A lot of people have passed through this country—the Byzantines, the Muslims, Tamerlane, the Mongols, the Ottomans," said Mr. Haddad, seated in the shadow of the convent of St. Thekla, the feminine hero of the biblical legend, the Acts of Paul and Thekla.
"Jesus was from just to the south. St. Paul came to Maalula," he says. "Christianity is very strong here."
John at 1:57:00 PM
Share
‹
›
Home
View web version