That Christians Should Be Dead To Both Insult and Praise 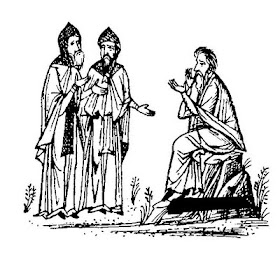 From The Sayings of the Desert Fathers, that the disciple of Jesus must be dead alike to insult and to praise.
Once a tribe of Mazici burst into the Scetis desert, and killed many of the fathers who dwelt there. Seven of the fathers found safety in flight, among whom were the elder Pimenius, and another older elder called Anub. These seven came in their flight to Terenuthi. There they found an ancient temple of some heathen god, now deserted by the worshippers. Into it they entered, meaning to dwell together for a week without speaking to each other, while each sought a place where to build his solitary cell, for in the Scetis desert these seven had lived as hermits.
Now, there was in the temple an image of the ancient idol. The elder Anub guessed the thought of dwelling together which had entered the minds of the brethren. He therefore, when he rose in the morning, used to cast a stone at the face of the idol. In the evening he used to speak to it, and say, "I have done wrong. Pardon me." On the Sabbath day, when the brethren met together, the elder Pimenius said to him, "How is it that you, a Christian man, have for a whole week been saying to an idol, 'Pardon me?'" The elder Anub replied to him, "I did this for your sakes. When I cast stones at the idol, was it angry? Did it speak to rebuke me? When I asked pardon of it, was it pleased? Did it boast?" The abbot Pimenius answered, "Surely no, my brother." Then said the elder Anub, "We seven are here together. If we wish to remain thus and yet find profit for our souls, this idol must be our example. When one of us is insulted or vexed by another, he must not get angry. When one of us is asked for pardon by his brother, he must not be puffed up. If we are not willing thus to live together it is better for each of us to depart to whatever place he wishes." Then all of them fell upon their faces to the earth, and promised that they would do as he advised.
John at 9:07:00 AM
Share
‹
›
Home
View web version