Was Constantine the Great Baptized An Arian? 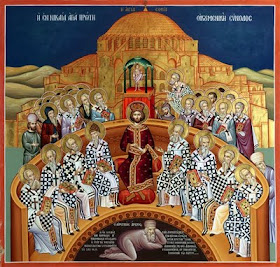 By John Sanidopoulos
A common myth circulated by critics of Constantine the Great to discredit his character and the good he did for the Church is the accusation that he was baptized into the Arian heresy by Eusebius of Nicomedia, who was an Arian, in May of 337, a few days prior to his death.
Of course this is not a recent issue, as it was addressed about 150 years ago by the historian Constantine Paparrigopoulos (1815-1891), who criticized western historians for circulating such misconceptions, which he called "insults and slanders". He writes of these historians: "They have even gone to the point of erasing his orthodoxy because he was baptized by Eusebius of Nicomedia" (History of the Greek Nation, vol. 2; p. 150).
The whole misconception about Constantine the Great being baptized an Arian originated from an incident of the First Ecumenical Synod, during which Eusebius of Nicomedia was presented as a leader of the Arians. This is the only connection critics have associating Constantine with being an Arian, having accepted baptism from a supposed heretic.
However, critics have not taken into account the entire historical data available to establish the truth of the matter, relying instead on speculation and conspiracy theories that are unfounded to push their own agenda. Without taking into account the fact that the Church faced these issues, they inevitably lead to the wrong conclusions. Because according to Ecclesiastical Tradition, which is crystallized in its Canon Law, one is not considered a heretic if he professes falsehood until he is invited to revoke and renounce his cacodoxy (false teaching).
The fact that one cannot be considered a heretic until one is invited to revoke and renounce his cacodoxy is a key element in arriving towards the truth of this issue regarding Constantine the Great. Furthermore, it must be emphasized that the characterization of a man as a heretic cannot be determined by one person or by a set of opinions, but must be determined by competent ecclesiastical organs, since it is not possible for every Christian to determine by himself who should be determined a christian and who should be determined a heretic.
Regarding Eusebius of Nicomedia's confession of faith prior to the baptism of Constantine and during the First Ecumenical Synod of 325, John Karmiris writes: "All the Fathers of the Synod accepted unanimously the Holy Creed, including those who professed Arianism, other than the above two, after around the six day dogmatic deliberations, and they signed on the 19th of June in the year 325" (The Dogmatic and Symbolic Writings of the Orthodox Catholic Church, vol. 1; p. 118).
This makes clear that the 318 Fathers who attended the Synod unanimously professed Orthodoxy. As for the phrase "other than the above two", Professor Karmiris noted a few paragraphs earlier that Theonas and Secundus were the only ones who confessed Arian teachings and did not accept the Nicene Creed. Eusebius of Nicomedia, though he did struggle to defend Arian doctrines, in the end he did sign in favor of the Nicene Creed, but together with Theognis of Nicaea and Maris of Chalcedon refused to excommunicate Arius. For this refusal and disloyalty, Constantine had not only Arius, Theonas and Secundus exiled, but also Eusebius of Nicomedia, Theognis of Nicaea and Maris of Chalcedon. Not long after however they were reinstated by the Church, according to the historian Sozomen, who writes:

Not long after, Eusebius, bishop of Nicomedia, and Theognis, bishop of Nicaea, regained possession of their churches after expelling Amphion and Chrestos who had been ordained in their stead. They owed their restoration to a document which they had presented to the bishops, containing a retraction: "Although we have been condemned without a trial by your piety, we deemed it right to remain silent concerning the judgment passed by your piety. But as it would be absurd to remain longer silent, when silence is regarded as a proof of the truth of the calumniators, we now declare to you that we too agree in this faith, and after a diligent examination of the thought in the word 'consubstantial,' we are wholly intent upon preserving peace, and that we never pursued any heresy. Having proposed for the safety of the churches such argument as occurred to us, and having been fully convinced, and fully convincing those who ought to have been persuaded by us, we undersigned the creed; but we did not subscribe to the anathema, not because we impugned the creed, but because we did not believe the accused to be what he was represented to us; the letters we had received from him, and the arguments he had delivered in our presence, fully satisfying us that he was not such an one. Would that the holy Synod were convinced that we are not bent on opposing, but are accordant with the points accurately defined by you, and by this document, we do attest our assent thereto: and this is not because we are wearied of exile, but because we wish to avert all suspicion of heresy; for if you will condescend to admit us now into your presence, you will find us in all points of the same sentiments as yourselves, and obedient to your decisions, and then it shall seem good to your piety to be merciful to him who was accused on these points and to have him recalled. If the party amenable to justice has been recalled and has defended himself from the charge made, it would be absurd, were we by our silence to confirm the reports that calumny had spread against us. We beseech you then, as befits your piety, dear to Christ, that you memorialize our emperor, most beloved of God, and that you hand over our petition, and that you counsel quickly, what is agreeable to you concerning us." It was by these means that Eusebius and Theognis, after their change of sentiment, were reinstated in their churches. (Ecclesiastical History, Book 2, Chapter 16)

This letter given to us through Sozomen is significant, because it states that Eusebius of Nicomedia accepted the Orthodox Faith and sought communion with the Catholic Church and renounced the heresy of Arius. It also reveals why Eusebius was sent into exile originally - because he refused to excommunicate Arius.
Certainly in the years following the First Ecumenical Synod in 325, Arian disputes continued to arise and gained resurgence, and Constantine did sometimes show favor to Arian bishops, but he did this sparingly in order to keep the peace of the Empire and the unity of the Church. For Constantine, as long as you showed loyalty to the undivided Church, he did not over-question personal intentions and thus disturb the peace. And if anyone did disturb the peace, be they Orthodox or not, they were sent into exile, as was the case with St. Athanasius of Alexandria. But as far as Constantine knew, Eusebius repented of his error in his letter and he was restored to his See and gained the favor of Constantine precisely because he was Orthodox. And it was from this canonical bishop of the Orthodox Church, Eusebius of Nicomedia, that Constantine received Holy Baptism, fully in canonical communion with the Church. Consequently, there is no hesitation on the part of the Orthodox Church, which takes the entire historical data into account, that Constantine the Great was baptized as an Orthodox Christian by an Orthodox bishop.
John at 1:08:00 PM
Share
‹
›
Home
View web version