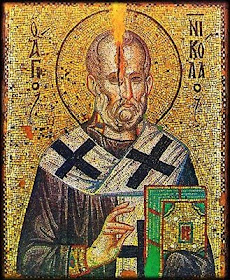 On Mount Athos is a monastery which is called Stavronikita which is dedicated to St. Nicholas. The monastery however was originally built in memory of St. John the Baptist. In the Iconoclast period, the monks threw many icons into the sea so they might not be contaminated by the hands of the Iconoclasts. One of those icons was of St. Nicholas, which is currently in the Monastery of Stavronikita and is one of the miraculous icons of Mount Athos.

Following the burning of the monastery by the Corsairs, the Patriarch Jeremiah the Elder sought to rebuild it in the name of St. John the Baptist. And while construction was started, the monks were throwing nets into the sea to catch a few fish. But when they pulled up their nets, they found within them the miraculous icon of St. Nicholas. In the icon (in the face of St. Nicholas) an oyster was stuck and embedded. When they pulled the oyster out of the icon, they were shocked. Blood ran from the wound opened by the oyster! Because of this miracle, the icon was named Agios Nikolaos o “Streidas” (Saint Nicholas of the Oyster), And the name remains to this day. The icon is very old. It was not made by painting, but is a mosaic (such as those in Hagia Sophia, Daphne, St. Demetrios in Thessaloniki, etc.). But such small icons on wood are rare. 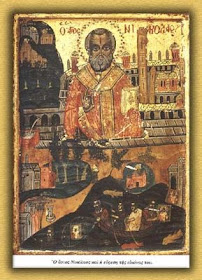 On the old Proskenetarion [veneration stand which held the icon] on Mount Athos, the following is stated about the icon of the Saint: "This icon came from the sea, because it was thrown therein at the time of Iconoclasm, and because of the long time it was in the sea an oyster was embedded in the forehead, and 'o streidas' was how it was called, and is guilded beautifully in gold leaf?." When the Patriarch saw the miracle of this icon, he dedicated the new monastery which was being built to St. Nicholas, and not the Forerunner. One half of the shell of an oyster the Patriarch used as a disc for the elevation of the Panagia on the Holy Altar, the other half was made into an engolpion [rounded jewelry worn by bishops with an icon of the Theotokos on it, they were once used to hold Holy Communion] and is now in the sacristy of the Patriarchate of Moscow. This miracle happened in 1553 AD.
John at 12:17:00 PM
Share
‹
›
Home
View web version