Largest Nativity Scene in the World 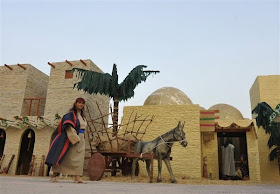 City authorities have set up a nativity scene -- certified by Guinness Records as the largest in the world -- as part of their Christmas festivities.

The nativity scene, which cost $2 million to create, sprawls across the parking lot of the giant Azteca stadium.

The scene, which covers 215,000 square feet -- larger than four football fields, has 5,000 figures portraying 57 biblical passages related to the birth of Jesus in Bethlehem.

Organizers said that it took architects, engineers, designers and historians 70 days to create the project, which was unveiled by Mayor Marcelo Ebrard on Wednesday, 17 days before Christmas.

More than 80 percent of Mexico's population are self-identified Catholics, according to Mexican census figures, and another 9 percent are various denominations of Protestant Christians.

Mexico has no state religion, but Christmas and other Christian observances such as Easter are national holidays.