Chesterton On Materialism As A Worldview 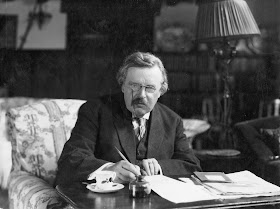 From G. K. Chesterton, an early twentieth century Catholic writer, both anti-materialist and anti-Darwinist, in his Orthodoxy:

As an explanation of the world, materialism has a sort of insane simplicity. It has just the quality of the madman’s argument; we have at once the sense of it covering everything and the sense of it leaving everything out… You can explain a man’s detention at Hanwell[1] by an indifferent public by saying that it is the crucifixion of a god of whom the world is not worthy. The explanation does explain. Similarly you may explain the order in the universe by saying that all things, even the souls of men, are leaves inevitably unfolding on a utterly unconscious tree—the blind destiny of matter. The explanation does explain, though not, of course, so completely as the madman’s. But the point here is that the normal human mind not only objects to both, but feels to both the same objection. Its approximate statement is that if the man in Hanwell is the real God, he is not much of a god. And, similarly, if the cosmos of the materialist is the real cosmos, it is not much of a cosmos. The thing has shrunk. The deity is less divine than many men…

For we must remember that the materialist philosophy… is certainly more limiting than any religion. In one sense, of course, all intelligent ideas are narrow. They cannot be broader than themselves. A Christian is only restricted in the same sense that an atheist is restricted. He cannot think Christianity false and continue to be a Christian; and the atheist cannot think atheism false and continue to be an atheist. But as it happens, there is a very special sense in which materialism has more restriction than spiritualism. Mr McCabe[2] thinks me a slave because I am not allowed to believe in determinism. I think Mr McCabe a slave because he is not allowed to believe in fairies… The sane man knows that he has a touch of the beast, a touch of the devil, a touch of the saint, a touch of the citizen. Nay, the really sane man knows that he has a touch of the madman. But the materialist’s world is quite simple and solid, just as the madman is quite sure he is sane. The materialist is sure that history has been simply and solely a chain of causation, just as the interesting person before mentioned is quite sure that he is simply and solely a chicken. Materialists and madmen never have doubts.

Spiritual doctrines do not actually limit the mind as do materialistic denials. Even if I believe in immortality I need not think about it. But if I disbelieve in immortality I must not think about it… [W]hen materialism leads men to complete fatalism (as it generally does), it is quite idle to pretend that it is in any sense a liberating force. It is absurd to say that you are advancing freedom when you only use free thought to destroy free will… You may say, if you like, that the man is free to think himself a poached egg. But it is surely a more massive and important fact that if he is a poached egg he is not free to eat, drink, sleep, walk, or smoke a cigarette. Similarly, you may say, if you like, that the bold determinist speculator is free to disbelieve in the reality of the will. But it is a much more massive and important fact that he is not free to praise, to curse, to thank, to justify, to urge, to punish, to resist temptations, to incite mobs, to make New Year resolutions, to pardon sinners, to rebuke tyrants, or even to say ‘thank you’ for the mustard. [3]

[2] Joseph McCabe (1867-1955) a lapsed Catholic, was ordained a priest in the Franciscan Order in 1890 but left the Order and forsook his religion in favour first of agnosticism and then atheism. He is mentioned in Chesterton’s Heretics. He took Chesterton to task for including humour in his serious writings. Chesterton responded: “Mr McCabe thinks that I am not serious but only funny, because Mr McCabe thinks that funny is the opposite of serious. Funny is the opposite of not-funny and of nothing else.” Cf http://en.wikipedia.org/wiki/Joseph_McCabe