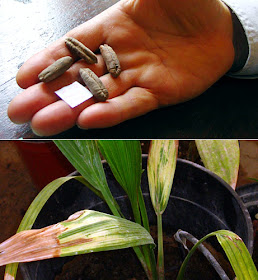 A date tree grown from the oldest viable seed in the world to be sprouted was planted Thursday at Kibbutz Ketura in the Arava, for therapeutic uses.

The tree, now 2.5-meters tall, was grown from a 2,000-year-old seed that archeologists found at a Masada dig in the 1960s. A team of researchers sprouted it, and it was initially planted in a secret location so it would not be stolen.

Now it is hoped that the plant, which is of a rare species, will produce fruit that could be used for medicinal purposes and for food.

A few years ago, Dr. Sarah Sallon, an expert in natural medicine at the Hadassah Medical Organization, heard a rumor that Bar-Ilan University botany Prof. Mordechai Kislev had the “hibernating seeds” that had been found during the archeological dig.

She received some and transferred them to Dr. Elaine Solway of the Arava Institute for Environmental Studies at Ketura. The one planted Thursday was the first one that sprouted.

Data about the date palm were published in the prestigious journal Science.

When the sapling was 15 months old, it was tested using a Carbon-14 radioactive isotope at the University of Zurich. The results showed that the seed was from the period of the Roman siege of Masada two millennia ago.

Genetic differences were found between the ancient date and modern ones. The strain was identified with the Judean Kingdom and depicted on Roman coins after the failure of the rebellion against the Romans. The species was known then to have therapeutic qualities and a delicious taste, but it disappeared from the land.

“We must renew our familiarity with the ancient plants that once grew in the region and investigate them scientifically to determine their characteristics. As Hadassah is well known for its development of modern medical technology, it is also promoting desire to discover ancient medical treatments,” Sallon said.
John at 8:06:00 AM
Share
‹
›
Home
View web version