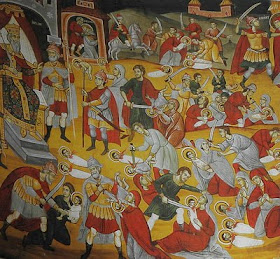 The infant-slaying Herod mentioned here is the same one that ruled at the time of Christ's Nativity. In those days, certain Magi, who were wise and noble men, perhaps even kings, set forth from the East, and came to Jerusalem, seeking the King of the Jews, Who had been born; and they said that in the East, where their homeland was, an unusual and strange star had appeared two years before, which, according to an ancient oracle (Num 24:17), was to signify the birth of some great king of the Jews. "For we have seen His star in the east," they said, "and have come to worship Him" (Matt. 2:2). Hearing these things, Herod was troubled, and the whole city together with him. Then, having inquired and been informed by the high priests and scribes of the people that, according to the prophecies, Christ was to be born in Bethlehem, he sent the Magi thither and ordered them that, when they would find the Child, to inform him, so that he also - as he affirmed - might go and worship Him. 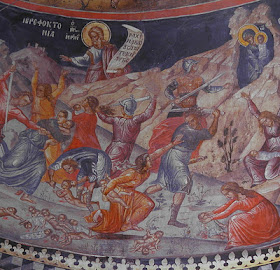 But the Magi, after they had worshipped, departed by another way to their own country by a divine command. Then Herod was wroth and sent men to slay all the infants of Bethlehem and the parts round about, from two years old and under, thinking that with them he would also certainly slay the King Who had been born. But this vain man who fought against God was mocked, since Jesus the Child, with Mary His Mother, under the protection of Joseph the Betrothed, fled into Egypt at the command of an Angel. As for those innocent infants, they became the first Martyrs slain in behalf of Christ. But their blood-thirsty executioner, the persecutor of Christ, came down with dropsy after a short time, with his members rotting and being eaten by worms, and he ended his life in a most wretched manner. 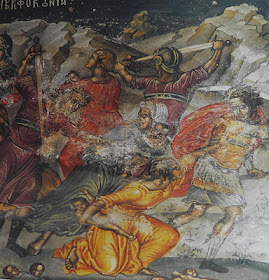 Apolytikion in the First Tone
Be Thou entreated for the sake of the sufferings of Thy Saints which they endured for Thee, O Lord, and do Thou heal all our pains, we pray, O Friend of man.

Kontakion in the Fourth Tone
When the King was born in Bethlehem, the Magi arrived from the East with gifts guided by a Star on high, but Herod was troubled and mowed down the children like wheat; for he lamented that his power would soon be destroyed.