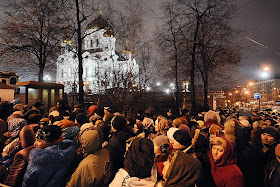 Braving freezing cold temperatures and ice-covered sidewalks, tens of thousands of Russians stood in line Wednesday to see and kiss a newly arrived relic of the Virgin Mary in Russia’s largest Orthodox cathedral.

The Virgin Mary’s Cincture, a belt that Christians believe was worn by Jesus’ mother, was brought to Russia last month from Mount Athos, a monastic community in Greece.

Kissing the relic, which is encased in an ornamental box, is believed to help barren women conceive and heal other ailments.

The line of people, mostly women, waiting to enter the golden-domed Christ the Savior Cathedral stretched for 2.5 miles (4 kilometers) along the Moscow River despite temperatures that dropped to below minus 5 Celsius (23 Fahrenheit).

Police officers announced through bullhorns that it will take worshippers 24 hours to get to the relic as the line swelled to tens of thousands.

Hundreds of buses brought pilgrims from other Russian cities. Some 150 buses were parked along the embankment with their engines running so the faithful could get warm as they waited. The city provided free tea and food and put up portable toilets.

Some 1,500 police officers were deployed to prevent people from cutting in line.

Traffic in central Moscow has been snarled since the relic first went on display Saturday. By Wednesday afternoon, as many as 300,000 people had seen the relic, which will remain on display through Sunday.

The St. Andrew’s Foundation, which brought the relic to Russia, said it was viewed by 2 million people in 14 other cities before arriving in Moscow.