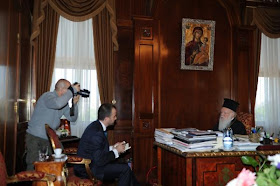 The hardship brought on by Athens’s present fiscal woes is prompting many Greeks to consider looking for opportunities in neighboring İstanbul, says a study published in the Sunday pages of the Greek newspaper Proto Thema.

According to the paper, officials from the Greek Orthodox Patriarchate and other Greek organizations based in İstanbul have been flooded with calls and letters from Greeks eager to get advice about finding work and housing in İstanbul. At least a decade of fiscal austerity looms in Greece, even after bailout countries agreed to a comprehensive relief plan at last week’s summit of European leaders.

The chair of İstanbul’s Union of Greek Foundations, Andonis Parizianos, was quoted by Proto Thema as saying that many Greeks are now considering registering for graduate school and seeking white collar jobs in the indebted country’s eastern neighbor. Officials at the patriarchate, meanwhile, note that some Greeks considering the move are descendents of Greek families who lived in İstanbul 50 years ago, before the last mass exoduses of İstanbul’s Greek population in the 1950s and 1960s.

Turkey’s ethnic Greeks, who numbered over 115,000 in the 1930s, began to leave Turkey en masse after the 1955 İstanbul riots. The riots saw the looting of Greek property and the murder of as many as 30 ethnic Greeks at the hands of nationalist mobs who were incited by falsified reports that Ataturk’s childhood home in the Greek city of Thessaloniki had been bombed. Turkey’s Greek population suffered another drastic decline in 1964, when roughly 12,000 ethnic Greeks who lacked Turkish citizenship were deported by the government. The two incidents, coupled with continued discrimination in the following decades, largely erased the presence of Greeks in İstanbul.

Today, the nationalist mentality that fostered such ethnic violence has largely evaporated, says Odisseas Vuçinas, a Greek psychologist who recently moved to İstanbul. “Turks have a positive attitude towards us.” he told Proto Thema.
John at 8:24:00 AM
Share
‹
›
Home
View web version