By Grace Ye Are Saved 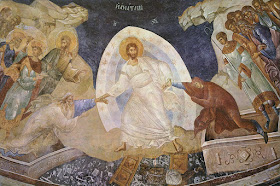 A child was traveling by night. He stumbled and fell into hole after hole and pit after pit, until he finally fell into a very deep pit from which he could in no way escape by his own power. When the child gave himself over to the hands of fate and thought his end was near, there was suddenly someone standing over the pit, lowering a rope to him and telling him to grab the rope and hold firmly to it. This was the king's son, who then took the child home, bathed him, clothed him and brought him to his court and set him beside himself. Was this child saved by his own deed? By no means. All he did was to grab the end of the rope, and hold on. By what, then, was the child saved? By the mercy of the king's son. In God's relationship with men, this mercy is called grace.

"By grace ye are saved." The Apostle Paul repeats these words twice in a short span, that the faithful might recognize and remember them.

Brethren, let us comprehend and remember that we are saved through grace by the Lord Jesus Christ. We were in the jaws of death, but have been given life in the courts of our God.

O Lord Jesus Christ our Savior, by Thee are we saved. To Thee be glory and praise forever. Amen.
John at 7:38:00 AM
Share
‹
›
Home
View web version