Why Young People Are Attracted to Wicca 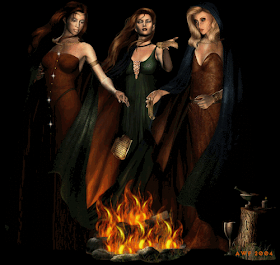 In April of 2007, the Department of Veterans Affairs approved the use of the Wiccan pentacle—a five-pointed star surrounded by a circle—on tombstones at Arlington National Cemetery and other U.S. military burial grounds. The pentacle joins a list of 38 other approved religious symbols including an atom for atheists, the humanist emblem, and various forms of the Christian cross.

Wicca, long considered a fringe spiritual practice, has entered the mainstream and the number of practitioners has skyrocketed over the past decade. According to the American Religious Identification Survey1 conducted every decade by the City University of New York, the number of Wiccans in America was seventeen times larger at the beginning of this decade than it was in the early 1990s. Not only are there military personnel who practice Wicca, but many high school and college students do as well. Wiccans on college campuses have been forming their own clubs for years.

If we hope to engage this growing segment of our society—particularly the young people who practice Wicca—typical Christian tactics such as organizing boycotts, letter-writing, and shunning Wiccan believers, must become a thing of the past. Too often, Christians have refused to treat Wiccans as their neighbors and have been content to remain ignorant about what Wiccans really believe and why they believe it. We know that Paul on Mars Hill and other members of the early church looked with compassion on the pagans in their midst and effectively engaged them in conversations about the gospel. We must do no less with modern-day pagans.

Neo-paganism, or simply paganism, which includes the modern practice of witchcraft, also known as Wicca, is an overarching term for earth-based spirituality that incorporates nature worship into a polytheistic worship of ancient gods and goddesses. Wicca is also known as “The Craft,” and most Wiccans believe in the manipulation of divine or cosmic forces through rite, ritual, and spell casting.

It is important to note, however, that Wicca is not a form of Satan worship. Wiccans worship and invoke pre-Christian deities and, like the ancient pagans, engage in earth worship. Wiccans will say that Satan is part of Christian and Jewish theology. There are Satan worshippers in the United States, however, who sometimes call themselves witches, which can be confusing. Wiccans do not deliberately invoke Satan. Whether or not they do so unwittingly is another matter.

Statistics tell us that three-quarters of practicing pagans are women. Estimates of the total numbers of practicing Wiccans in America vary wildly, as people can be reluctant to reveal their spiritual inclination publicly. Conservative estimates put the number at somewhere between 150,000 and 200,000. A poll2 conducted by a large pagan group put the number at almost 800,000, whereas some Wiccans claim that they number in the millions. Wicca is clearly on the rise and these numbers reveal a growing spiritual hunger for something that is not being met by traditional means.

Why Wicca, Why Now?

I spent a year crisscrossing the country researching the answer to this question for my book Wicca’s Charm: Understanding the Spiritual Hunger behind the Rise of Modern Witchcraft and Pagan Spirituality.3 All of the young people I met were interested in spirituality, but not necessarily organized religion.

Why is Wicca on the rise and why does it appeal particularly to young people? First, young people are drawn to Wicca because it has no orthodoxy and has no concept of absolute good or absolute evil. This is greatly appealing to impressionable young people. There are some common practices, rituals, and sayings, but for the most part practitioners can add and subtract to it at will. It is a perfectly postmodern religion. One high school student said she liked Wicca because it was “malleable” and allowed her to create her own religion as it suited her.

Second, I found that young people turned to Wicca because they desperately wanted to believe in something that was “real.” Too many had the false impression that Christianity was simply a collection of rules or nothing more than a boring church service. Teenagers often lacked a robust understanding of the Incarnation and had no concept of the Trinity. This lack of biblical literacy had led them to become easily impressed by magic and by the occult experiences in Wiccan rituals and practice.

Third, Wicca appealed to these young people because it promotes glorification of self. Unlike Christianity, in which God is essentially separate from creation, the gods and goddesses that Wiccans invoke are not. For instance, a young woman who might be feeling angry will take part in a ritual in honor of the Greek goddess of war Athena through which she can vent her anger, and another who might hope to fall in love will petition the goddess Aphrodite. Much of Wiccan ritual is designed to help women, in particular, draw on the power within—which is usually represented by the type of goddess they invoke. These young women enjoy worshiping goddesses, in part because one of their main complaints about the church is that they feel it is patriarchal.

Fourth, many young people embrace Wicca because they, like adult Wicca devotees, are bound by and to a passionate love of nature. Wiccans love the earth and care deeply for the environment. Some feel that the American church has been silent when it comes to stewardship of the environment.

Some of the complaints that Wiccans voice about the way Christianity is practiced have some merit, and I found that most Wiccans took issue with Christian behavior rather than with the gospel itself. Many of them had been disappointed by a pastor or wounded by someone in the church, and some of them had asked difficult questions about Christianity that no one had taken time to answer. Others simply refused to believe the gospel message. When conversing with Wiccans, it is important to approach the conversation with a gentle and humble spirit and to admit where the church might have failed them, but also to explain to them the glorious message of the gospel.

I have found Wiccans to be voracious seekers of knowledge. We must encourage this seeking spirit. They have one thing in common with Christian believers, and that is that they believe in the spirit world and thus want to live their lives according to some kind of spiritual practice. This common interest is a great place from which to launch a dialogue with a Wiccan.

In Acts 17, Luke describes Paul’s interactions with the pagans in Athens. He waded into a pool of pagan thought and spent time there. Acts 17: 22–234 reads, “’Men of Athens! I see that in every way you are very religious. For as I walked around and looked carefully at your objects of worship, I even found an altar with this inscription: TO AN UNKNOWN GOD.’” Paul took time to walk around Athens and study the Athenian rites and rituals, their gods and goddesses. He did not simplistically condemn these men and women without knowledge of what they believed; in fact, he even complimented their religiosity!

If we find out that our children, friends, or other family members are interested in Wicca, the best approach is first to listen and find out what interests them about this belief system. Why are they drawn to it? What does it seem to offer that Christianity does not? It is important to become familiar ourselves with the practice of Wicca to engage in a conversation about it properly.

Parents must be able to give an articulate response about what they believe and why they believe it. It is usually not enough simply to ban the practice of Wicca in the home or to forbid any interaction with Wiccans. That usually motivates a young person to explore further—in secret. I met countless college students who couldn’t wait to get to college so they could join the Wiccan club on campus away from their parents’ watchful eyes. If a Christian parent forbids pagan practices in the home, it is vital that they also engage their children in meaningful conversations about their beliefs and gently challenge them with the message of the gospel. I found that young people are yearning for such meaningful conversations with their parents.

When talking to Wiccans, let them know that Christianity is real—that Christians believe that God became flesh, dwelt among us in the form of Jesus Christ, and left the Holy Spirit for His followers as a real presence of God here on earth. No god or goddess that Wiccans worship became incarnate, died once and for all for our sins, and rose from the dead. The gospel message is good news!

It is also important to point out gently where Wicca is inconsistent. Without a God who is perfectly good, there are no absolutes, no standards by which to measure what is just or unjust. Wicca borrows from Christian values of right and wrong. Wiccans might get upset at how women have been treated, but on what do they base their anger—that treating women poorly goes against their personal taste? Christians believe mistreating women is wrong because God said so. Christians also believe that all life has dignity because we are made in God’s image. Wiccans don’t believe this, but without this belief they have only shaky ground on which to condemn injustice.

When it comes to the environment, it is important to note that the Bible teaches that God delights in His creation, so we, then, are to be good stewards of His creation. Scripture reveals a God who created man and woman from dust, blessed this earth with His presence by taking on material flesh Himself, and promised a renewed earth. We must be honest and admit that professing Christians have not always treated God’s creation with the care we should. It is not too late to start, however. Projects such as restoring a local wilderness area or including creation care in a Sunday school curriculum are simple. We should not be surprised at how much this genuine concern for creation would interest the Wiccan community and pique their curiosity.

As the number of Wiccans continues to grow, it is more important than ever for Christian believers to treat Wiccans in the same way we would treat believers of any other faith. If you meet a Wiccan and find yourself filled with fear, stop and pray. We have no reason to fear—for the power that is in us is greater than that which is in the world! I hope that this Halloween, Christians will pray for their Wiccan neighbors and reach out to them with the love of Christ.

4. All Scripture quotations are from the New International Version.