The Skeptic Who Investigated the Tomb of Saint Demetrios 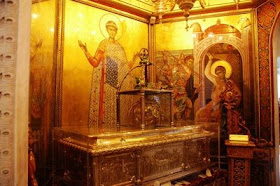 There lived once an ascetic on the Mount of Solomon who, hearing of the reports of the holy myrrh [of St. Demetrios], had doubts, saying in his mind that there were many other great martyrs who suffered more than St. Demetrios, yet they were not honored by God in such a manner. And one night later he saw, as if in a dream, that he was in the Church of St. Demetrios and he met the man who had the keys to the tomb of the Saint, and he asked him to open it that he might venerate it. When he was kissing the shrine, he observed that it was wet with fragrant myrrh, and he said to the keeper, "Come, help me that we might see from whence comes this holy myrrh." They dug, therefore, and came to a large marble slab which they removed with great difficulty, and immediately there appeared the body of the Saint, shining and fragrant, from which welled up abundant myrrh coming from the openings of his holy body made by the piercings of the lances. There flowed so much myrrh that both the keeper and the ascetic were drenched, and fearing to be drowned, the monk cried out, "Saint Demetrios, help!" Whereupon, he awoke from this vision and found himself to be drenched with the holy myrrh.