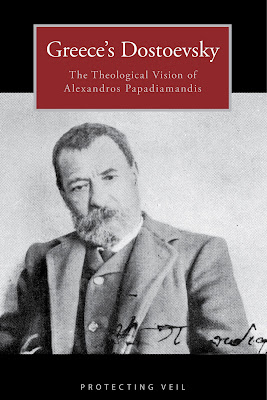 {The following is the last in a series of four guest posts from Herman A. Middleton, author of Precious Vessels of the Holy Spirit: The Lives and Counsels of Contemporary Elders of Greece (featuring eight Greek Orthodox monastic elders), and translator of the recently released Greece's Dostoevsky: The Theological Vision of Alexandros Papadiamandis (a study of one of modern Greek literature's finest writers). It is about his new book that he now writes. (The first, second, and third posts are posted elsewhere, for which see below.)}

In previous posts, I have looked at Dr. Anestis Keselopoulos's book, Greece's Dostoevsky: The Theological Vision of Alexandros Papadiamandis from a variety of angles.

In the first post I discussed my impetus for translating the book. In the second post, I looked at Papadiamandis's biography and work, and considered why he is a seminal figure in both the Greek as well as the wider Orthodox world. In the third post I looked more closely at the book itself, what it contains, and many of the issues it touches upon. In this final post, I wanted to discuss in greater detail the significance of Papadiamandis for the West, in particular the example of Papadiamandis as an artist-evangelist, and as an example that can inform and instruct artists desiring to create faith-inspired work.

To begin, though, permit me to share a personal story that ties in with this topic. In previous posts on my blog, I have touched upon the important role that reading The Brothers Karamazov played in my conversion to Orthodoxy. I was studying academic theology at an Evangelical Protestant college, and was tired of dry Biblical interpretations and academic arguments. At the heart of the Orthodox understanding of theology is Evagrius of Pontus's celebrated saying: "The one who prays is a theologian; the one who is a theologian, prays." Without an active prayer/spiritual life one cannot be a theologian. It was not a surprise, then, that my conversion to Orthodoxy was largely influenced by the stories of others who had faith/prayer/spiritual lives and who experienced God's grace. I sensed that these were not simply fictional stories, but that they touched upon truths that I had personally never experienced.

I mention my story to underline the significance Papadiamandis (as Dostoevsky) has for the West and for Orthodox mission in particular. When it comes to religion, our society is largely jaded, fatigued by polemic and the hypocrisy of many religious people. It has always been true that it is not intellectual arguments, but encounters with love and grace that convert people to Christ. This has never been more true than today, when romantic notions of faith and holiness that make the spiritual life seem beautiful or easy ring particularly hollow. It is the realism of artists such as Dostoevsky and Papadiamandis that has the power to touch human hearts.

Papadiamandis's obvious affection for and championing of the weak, maligned, and downtrodden, and his refusal to pass judgment make him accessible to skeptical humanists. His obvious humanity is attractive, and makes reading his stories easier for modern sensibilities. Papadiamandis offers much more than this, however.

"Can an American living in such a complex society with people traumatized by a diversity of psychological disorders gain [the] honesty, [the] simplicity, and [the] humility [of the faithful of Skiathos]? If he has the opportunity to immerse himself fully in the life of the Church and if the wise precepts of the Fathers for the liturgical life and the life in Christ are implemented, all things are clearly possible through the grace of Christ. In fact, the point of Papadiamandis's narratives is that the downtrodden, wounded, and despised can be transfigured into the glorious people of God through the Church's divine worship."

As I mentioned earlier, realism is an important characteristic of Christian non-liturgical art. Also, Christian art makes use of the "language" of Christianity (symbolism, language, history, etc.), even if it doesn't deal with overtly "religious" themes. Both Papadiamandis and Dostoevsky use this language, though neither one could be accused of writing "religious" literature. In a world where sentimental and simplistic pop "Christian art" is a market of its own, Papadiamandis offers another vision, another way of understanding both art and Christianity that has the potential to be profoundly redemptive. In the Translator's Foreword to the book, I go into more detail regarding the particularly "Christian" aspects of Papadiamandis's art.