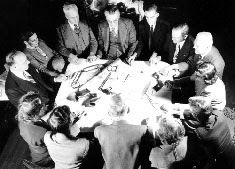 Finally, one woman rose from the table and announced to the others - and to a listening radio audience - "Houdini did not come through," she said. "My last hope is gone. I do not believe that Houdini can come back to me, or to anyone...The Houdini Shrine has burned for ten years. I now, reverently... turn out the light. It is finished. Good night, Harry!"

The woman was Bess Houdini, wife of the famed magician and escape artist. And this was the last séance she would participate in to try to contact her dead husband. But the séances themselves did not stop. Every October 31, from 1927 up to the present day, a séance has been conducted with hopes of contacting the spirit of Harry Houdini. So far, the great Houdini has not made his presence known.

The Houdini séance has been a Halloween tradition since the first anniversary of his death. The magician died at the age of 52 on October 31, 1926 from peritonitis - an internal infection - as the result of a ruptured appendix.

Shortly before his death, Houdini made a pact with Bess that if he could, he would return and make contact with her from the other side. They devised a coded message that only he and Bess knew; this would prove that it really was Houdini breaking through from the afterlife. But after 10 séances in 10 years, Bess had not received her beloved husband's personal message.

Oddly enough, Harry Houdini did not necessarily believe that spirits of the dead could be contacted. Aside from his fame as a stage magician and astonishing escape artist, Houdini was just as well known - especially in the later part of his career - as a debunker of spirit mediums and phony séances. He felt, however, that if it were possible for anyone to come back, he would find a way to do it.

In the 1920s, spiritualism was at a new height in the US and Britain. There was a strong, popular belief in the notion that it was possible to communicate with the dead through séances and channeling psychics knows as mediums. The movement had begun in the mid-1800s, grew in popularity over 20 years, then slowly fizzled out toward the turn of the century as more and more mediums were exposed as frauds. But after World War I, there was a resurgence in the spiritualist movement as many families longed to contact those who had perished in battle.

And the mediums were right there to fill the need for a public so willing to believe. The best mediums were masterful tricksters and showpeople, and their séances were thrilling multimedia performances of spirit channeling, levitating tables, floating instruments that played themselves, written messages from the dead and spontaneous manifestations of ectoplasm. The performances were ingenious and succeeded in fooling many otherwise intelligent people. Houdini, being a magician and a rather ingenious fellow himself, knew that these séances were just clever hoaxes. 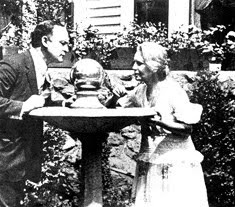 HOUDINI VS. THE MEDIUMS

Early in his career, however, Houdini wasn't above staging some phony séances of his own. According to Houdini: A Magician Among the Spirits, "Houdini hosted special Sunday night performances for the California Concert Company, a Midwestern medicine show, in 1898. During séances, Houdini floated tables and played musical instruments while tied to a chair. After the company disbanded, he and his wife Bess continued to give séances for local union halls and dime museums until they signed with the Welsh Brothers Circus later that same year. In 1899, Houdini's career skyrocketed and he left the medium business behind."

In the 1920s, Houdini became an active crusader against the spirit mediums he felt were exploiting gullible people who grieved for lost loved ones. As he traveled the country performing his act, he would seek out the local mediums and expose their deceptions. Because he was so well known, Houdini often attended these séances in disguise. In 1922, Scientific American magazine asked him to join a "psychic committee" to help investigate the claims of mediums. The magazine offered a cash prize of $2,500 to any medium who could produce a supernatural manifestation to the satisfaction of the committee. No one ever won the prize.

One of the most famous mediums to take on the challenge was a beautiful young woman named Mina Crandon, who gained renown as "Margery, the Boston Medium." But she too failed under the sharp eye of Houdini, who caught her levitating the table with her head and ringing a bell with her foot. Houdini later offered Crandon $5,000 if she could demonstrate any supernatural phenomena on stage in her home town of Boston. She declined the invitation.

Naturally, Houdini was not popular among mediums around the country, as he was a threat to their livelihood. His crusading also made him an adversary of Sir Arthur Conan Doyle, esteemed author of the Sherlock Holmes novels, who was a staunch believer and advocate of spiritualism, and a defender of Mina Crandon. After Houdini and the Scientific American committee denounced Crandon, Doyle wrote an article for the Boston Herald criticizing the committee. Houdini, in turn, threatened to sue Doyle for his "harsh remarks."

Since the Halloween night when Bess Houdini turned off the light at her husband's portrait, the séances to contact the dead magician have continued in many parts of the country, both officially and unofficially. It may be impossible to tell whether or not Houdini is really being channeled at any of these annual séances because the secret coded message Houdini devised with his wife has since been revealed - by Bess herself.

"The message was based on both sentimentality and an old vaudeville mind-reading routine," according to Houdini - magictricks.com. "The message was, 'Rosabelle- answer- tell- pray, answer- look- tell- answer, answer- tell.' Bess's wedding band bore the inscription 'Rosabelle,' the name of the song she sang in her act when they first met. The other words correspond to a secret spelling code used to pass information between a magician and his assistant during a mentalism act. Each word or word pair equals a letter. The word 'answer' stood for the letter 'B,' for example. 'Answer, answer' stood for the letter 'V.' Thus, the Houdinis' secret phrase spelled out the word 'believe'."

In 1929, a young medium named Arthur Ford claimed he had successfully received the secret message from Harry Houdini. Upon investigation, however, it was discovered that Ford's claim was a hoax. Bess, it seems, had inadvertently revealed the message to reporters more than a year earlier.

Even though Bess gave up the séances herself, she asked magician Walter B. Gibson to carry on the October 31 tradition. For many years, Gibson, along with several other magicians, held the séances at the Magic Towne House in New York City. Countless other "unofficial" Houdini séances have been held by local psychics across the country throughout the years - all in good fun, but with no definitive proof of so much as a "hello" from Harry Houdini.

Today, the official Houdini Séance is held at The Houdini Museum in Scranton, Pennsylvania. And true to the times, they have been conducting séances on the Internet.
John at 10:25:00 AM
Share
‹
›
Home
View web version