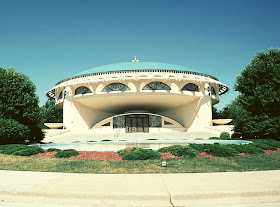 Annunciation Greek Orthodox Church in Wauwatosa, Wisconsin was designed by architect Frank Lloyd Wright in 1956, and completed in 1962. It is listed on the National Register of Historic Places. The church is one of Wright's last works; construction was completed after his death and had a building cost of $1.5 million dollars. Its shallow scalloped dome echoes his Marin County Civic Center.

In the last few years of his life he completed almost seventy works, several of which illustrate his interest in the circular form. (See, for example his Guggenheim Museum in New York City.) Wright's circular design uses two important elements from Greek Orthodox churches, the dome and the Greek cross. The shallow concrete dome (106 feet in diameter) is superimposed on a floor plan in the shape of a Greek cross; the Greek cross inscribed within a circle is a key design element in the details of the church as well.