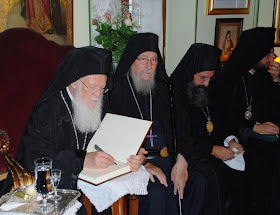 Ecumenical Patriarch Bartholomew called the continued "occupation" of the complex of the Monastery of Esphigmenou from the schismatic former Esphigmenou monks "unprecedented violence" within the limits of the Greek Republic and a "dangerous drift" on the Holy Mountain.

During his visit to the delegation of new Esphigmenou (which was staffed by a new brotherhood of Katsoulieridon) in Karyes, the Ecumenical Patriarch referred to the occupying schismatic monks clarifying "the matter of ecclesiastical confrontation within the walls of the Monastery and other parts of it shall remain to be considered despite remaining fully closed, permanently."

He stressed that the same applies to the administrative and judicial ends, that the occupation is a "punishable" and "a criminal offense", as according to the Charter of Mount Athos it refuses settlement to schismatics in the monastic state.

Mr. Bartholomew said that the "Mother Church" with much sadness follows "organizations who speak of tolerating the phenomenon of occupation" and recommended that the monks of the new brotherhood be patient in the struggle until the restoration of "regularity and legality".

The Ecumenical Patriarch underlined that any disputes between the monks should be solved in a constructive exchange of views within the Church and not to lead to "schismatic division", recalling that the occupying monks, despite the efforts of his predecessors Athenagoras and Demitrios, but even till this day, denied the spiritual unity and cooperation with the other nineteen monasteries.

The abbot of the new Esphigmenou, Chrysostomos, speaking to the Ecumenical Patriarch asked that the "government restore order and lawfulness" and not allow the "arbitrary interference" and "anarchic logging" by the occupiers, who threaten the buildings and the natural environment around the historic Monastery.