The Origins of Idolatry (Agapius the Syrian) 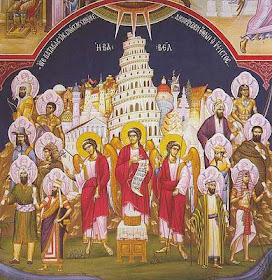 By Agapius the Syrian
It is written that when the languages of the tribes of the children of Shem, Ham and Japheth, son of Noah, were divided in all the climates on the surface of the earth; when they had occupied their areas and when each language, each people and tribe had moved away into an unspecified region of a climate of the earth, as we described, the people began to make war on each other, one against another.

Each tribe and each people chose a head of an army, who led their troops and led them into battle, going at their head. It is told that once, when some of the chiefs of the warriors and commanders of the troops returned victorious and triumphant to their companions, their people and their tribe, the people took them as their masters because of their victory and for their chiefs, renowned and famous for their exploits, their wars and their success, they set up idols bearing their names and resembling them, so that these idols recalled the memory of those who had made conquests to their profit and had returned victorious to them.

A long time after this, people started to show veneration towards them and to offer sacrifices to them, initially as a testimony of veneration for them and to remember the victories which they had gained; then when misfortunes occurred, when their enemies, wanting revenge, inflicted on them all kinds of evils and wounds, they came to these idols, beseeching their help.

For this reason, in the times that followed, the worship and the veneration of the idols were introduced by the living themselves of the heroes; devils, according to what is written, spoke to the men from the interior of these idols.