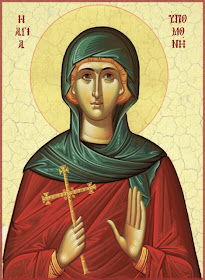 St. Ypomoni the Righteous (Feast Day - March 13 and May 29)
St. Ypomoni (Patience), in the world named Helen Dragaš, and later as the wife of Manuel II Palaiologos was called: "Helen, in Christ God Augusta and Empress of the Romans, Palaiologos". She was the daughter of Constantine Dragaš, one of the many leaders and inheritors of the large Serbian kingdom of Stefan Dusan. She came from a royal and blessed genealogy. Many of her ancestors were Saints (e.g. Stefan Nemanja, the Serbian king and founder of the Holy Monastery of Hilanderion on Mount Athos, and known as St. Symeon the Myrrh-gusher). Constantine Dragaš assumed the leadership of what is today the Bulgarian portion of northeast Macedonia, in the area between the rivers Axiou and Strymonos. Her birth took place immediately after the death of the Dusan years. Her upbringing, education, and her formation were greatly influenced by the Byzantine ideal, because the Serbs were greatly influenced by Byzantine culture. They thought of themselves as more identified with the culture and especially the national consciousness of the Byzantine Empire. Emotionally and essentially they were considered Byzantine/Roman, as she was later allowed to become Augusta and Empress due to her birth in the Serbian homeland. Above and beyond these, she was raised with the family tradition of the unshakeable Orthodox faith. This faith guided and illumined her, and would inspire her life which would be full of sorrows and trials. She was about 19 years old when she married Manuel II Palaiologos (1390), a few days before becoming Emperor.
The new life of Helen from the beginning showed itself to be a Golgotha. Many times she had to drink the cup of insults and debasement by her husband's side, not only from those of other religions, but from the Christians of the Western nations, in their desperate attempt to find ways to save the dying Empire. Helen demonstrated to be an outstanding person who gathered many great virtues and spiritual strength. She showed that she had a total sense of her position and circumstances, and her role and what was required, at all levels. She loved the people. She was the Great Mother whom anyone could approach. She shared in the anxieties and concerns of her fearful nation and whatever she did was accompanied by prayer, with her meek, sweet and consoling words. What was briefly written about the Empress by George Gemistos-Plethon was very characteristic and eloquent: "This Queen with much humility and perseverance appeared to address the two ways of life. Neither at the time of testing was she swayed, nor when she was granted rest, but in each case she did what was required. She joined together intelligence and bravery, more than any other woman. She was distinguished for her chastity. She had completely deep righteousness. We did not know how to do evil to anyone, either men or women. Instead we know that she did much good to many. With what other way can righteousness be shown in practice, other than to never do your own will or show evil towards anyone, but only show good to many?” She proved worthy of her philosophical and Christ-loving husband, Manuel. She proved worthy to work next to him for 35 years, in accordance with their martyrdom, in other words, everything was held in agreement and harmony, co-spirits of Christ in holiness of struggles. They managed to honor virtue with words and deeds. “By word of teaching the practical, their work became prototypes and icons of applied love."
To this blessed couple God graced eight children. From the six boys two of them ascended the Emperor’s throne, John VIII and Constantine XI; the last being the legendary Emperor. Theodore, Demetrios and Thomas became leaders of Mystra, and Andronikos of Thessaloniki. The two girls, however, passed away at a young age. The mother who had so many children and who loved them so much, nurtured them with the faith and the sweet teaching of our Orthodox Church, taking them to holy shrines and sacred Monasteries of the Kingdom, and sought prayers for them by the holy ascetics and elders. She raised them “in the law of the Lord from youth”, and never “ceased with tears of prayer and love to instill the law in each one”. With patience and persistence, with care and prayer she shaped their characters, and together gave them “life” and “good life”. In this way, she managed, among others, to end 90 years of conflict between the members of the Imperial Family, which had extinguished the Empire. Any differences of opinion or conflicts that occured (after the death of Manuel) were overcome silently with the prestige of her motherly intervention and her prayer. 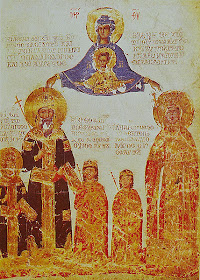 Her love towards the monasteries was special. There she felt rest, her soul would rest, and she drew strength and courage for what would follow. This she imparted to her whole family. Her husband, who ceded the throne to his first-born son John two months before his death (May 29th 1425), he enrolled in the Pantocrator Monastery in Constantinople, where he was tonsured a monk with the name Matthew. She, after the death of her husband became a nun (1425) in the Monastery of Lady Martha, with the name Ypomoni (Patience). And three from their children became monks, Theodore and Andronikos (Monk Akakios) in the Pantocrator Monastery, and Demetrios (Monk David) in Didymoteicho. Further, as long as they were in their homeland, together with her father she built the Holy Monastery of Panagia Pammakaristos in Poganovo of the city of Demetrovgrand in southeast Serbia.
In Constantinople she was associated with the Holy Monastery of the Precious Forerunner of Petra, where the Holy Relic of St. Patapios the Righteous Wonderworker was kept, to whom St. Ypomoni showed a special reverence. The Monastery was founded by the fellow ascetic of St. Patapios in Egypt, Vara the Righteous, outside of the Roman gate before 450 AD. With St. Ypomoni’s help she founded in the Monastery a female old-age home with the name “The Hope of the Hopeless”. Her reverence towards St. Patapios was revealed by the fact that the iconographer of the cave of St. Patapios on the Geraneia Mountain of Corinth considered it essential to depict St. Ypomoni next to the body of the Saint. St. Ypomoni was a bright and illumined person, endowed with many talents, which she “traded” with wisdom and prudence and gained much, managed with virtue, asceticism and endurance to reach a hard to scale measure of virtue.
A meaningful physiognomy of her time, Gennadios Scholarios, the first Ecumenical Patriarch after the Sack of Constantinople, in his Paramythetiko Logo to King Constantine XI in the section titled: “At the dormition of his mother St. Ypomoni”, he offers the following characteristically: “This blessed Queen when she was visited by someone wise, he would leave amazed from her unique wisdom. When she met some ascetic, he would leave after the meeting, shamed by his poor virtue and ashamed by her virtue. When she met someone intelligent, he would be struck by her greater intelligence. When she would meet with a legislator, they became more careful. When she spoke with some lawyer, they believed that they had before them the Rule of Law in practice. When someone brave would meet her, they would feel defeated feeling amazed by her patience, wisdom and strength of character. When she was approached by some philanthropist, they were struck by her greater and perceivable feeling of philanthropy. When she met some friend of amusements, they would gain wisdom, and coming to know their humility before her, repented. When she met some a zealot of piety, they would gain greater zeal. Every one suffering, after meeting with her, received some relief of their pain. Every arrogant person berated his great self-love. And in general there was no one who came into contact with her and did not become better.”
God granted her to not live through the last tragic moments of the Empire. He called her close to Him on March 13th 1450, having lived 35 years as Empress and 25 years as a humble nun. Her servant John Eugenikos, the brother of St. Mark Archbishop of Ephesus, in his Paramythetiko Logo to Constantine Palaiologos "At the dormition of his Mother St. Ypomoni", wrote: "As for your eternal Lady Mother, everything as long as she lived was excellent: faith, works, generation, the way life, word and everything together was pure and worthy of divine honor, and as she lived as a partaker of divine Providence, thus she ended.” The “Holy Lady” as she is named by George Frantzes, is joined with the thought of her monastic name (Patience) with the way she confronted the good and also the many problems in her whole life. Patience in life, deed and monastic name. “In patience she possessed her soul.”"
The holy skull of St. Ypomoni is kept today at the Holy Monastery of Saint Patapios in Loutraki of Corinth. 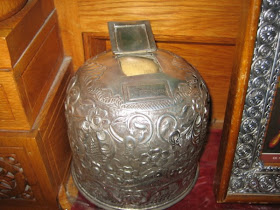 A Recent Miracle of the Saint
Many are the appearances of St. Ypomoni in the last few years to the faithful and also to non-Christians. The following miraculous appearance involved the healing of a sick man.
St. Ypomoni appeared as a nun to a taxi driver from Athens. She stopped his taxi and sought to be driven to Loutraki. The taxi driver had skin cancer on his hands and was experiencing a great lack of faith. On the way, the nun, who wore a cowl with a red cross, asked him:
"Why are you sad?"
And he did not hesitate to confess the whole truth. After she asked him if he wanted her to make the sign of the Cross on him so that he would become well, and he agreed. In a short time however, he started to get sleepy, and he asked the nun if they could stop for a little so that they wouldn't be killed. They had arrived close to the destination, and it would be easy for her to find another taxi. He stopped on the side of the road and fell asleep. When he woke up he noticed that his hands were better, but the nun had disappeared. He asked people in the area if they saw a nun near there, but no one had seen her. He therefore returned to his taxi and realized that it had been some saint who had then disappeared. He headed right away to his doctor and related what had happened. At that instant his eyes fell on an icon which was hanging in the doctor's office, and he fell from his chair and cried:
"That was her."
The icon was of St. Ypomoni. Thus he learned who it was that healed him and softened his unbelief. The cowl with the red cross showed her origin before becoming Empress of Byzantium, and with this monastic schema her life ended. Later it became known that the day when the miracle occurred was March 13th, the day when the Saint celebrates.

Apolytikion in Plagal of the First Tone
The noble Queen let us hymn, Ypomoni the Righteous, the pious dove who flew from the world's disarray towards the dwelling place of heaven, in unending love, asceticism and humility, let us cry: shatter by your prayers the shackles of the lawless, O Queen.
Kontakion in the Plagal of the Fourth Tone
Bearing the name of Godly-strengthened Patience, and the most honored of the Godly-wise rulers, who shone as a star in Byzantium and blazing among the choirs of the monastics, with the rays of humility let us praise her, crying out fervently: Rejoice, O most-praised Mother.
Megalynarion
Rejoice, archetype of patience, pillar of abstinence, unassailable in virtues, O wall and treasury of love, Ypomoni, glorify the horn of pious rulers.
Source: Translated by John Sanidopoulos.