Saint Lydia of Philippi, the Equal to the Apostles 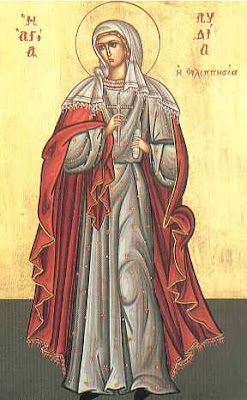 St. Lydia of Philippi (Feast Day - May 20)
As recorded in the Acts of the Apostles (16:12-30), Lydia of Philippi was the Apostle Paul’s first convert to Christianity in Europe. Her conversion came after hearing Paul’s words in Philippi proclaiming the Gospel of Christ during his second missionary journey.

As described in the Acts, Lydia was a “seller of purple”, a person who traded in purple dyes and fabrics for which the city of Thyatira was noted. Purple goods were part of a high value industry and were used by emperors, high government officials, and priests of the pagan religions.

Tradition relates that she and her husband may have been involved in this business. At some point Lydia and her household moved from Asia Minor to the city of Philippi in Macedonia. The reasons she moved may have been business related as Philippi was a Roman colony on the major east-west trade route, the Egnation Highway, between Rome and Asia. Also, she may have been a Jewish convert who no longer could worship in the custom of the Thyatirans.

Lydia met with the Apostle Paul on his second missionary journey about the year 50. Paul and his companions started their journey visiting the established churches in western Asia Minor when he answered a vision in which he saw a man dressed in a Macedonian manner calling upon him to “Come over to Macedonia and help us.“

Paul’s custom was to find local synagogues in which he would preach. But, apparently the Jewish population in Philippi was not sufficient to allow holding Sabbath Services for the Jewish men. Thus, Paul’s party walked out of the city following the Gangites River (now called the Angista River) when they came upon a group of women praying in the manner of Jews, along flowing water. After greeting the women, Paul and his companions sat down and shared the good news of Christ’s salvation with them. Lydia, among the women, had listened attentively and took the message to heart. She and her family were then baptized in the Gangites River along which they had been praying. Thus, Lydia became the first person in Europe to become a follower of Christ.

As Acts notes, Paul and his companions were well received by Lydia as they stayed at her house after their release from the Philippi prison. Surely, during their imprisonment, Lydia and those who assembled in her home spent the night in prayer for the release of Paul and Silas, making her home the first Christian Church in Europe. When Paul departed from Philippi he left Luke behind to preach the Gospel and to establish firmly the church in Philippi, using as its core Lydia, the jailer, and their households.

Paul speaks fondly, in his letter to the Philippians, of the brethren who were members of the church of Philippi, calling them ”…my beloved and longed-for brethren, my joy and crown…” (Philippians 4:1). 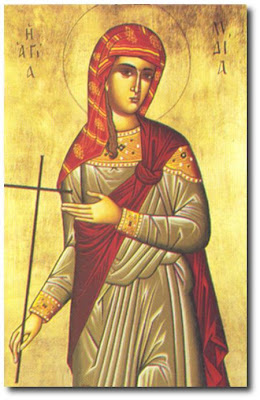 There are churches in both Kavala and Asprovalta dedicated to Saint Lydia.
Saint Lydia was recognized as a Saint in the Orthodox Church by the Ecumenical Patriarchate under Athenagoras I on 23 May 1972. She is commemorated annually on May 20th.
Apolytikion
Through thee the divine likeness was securely preserved, O Mother Lydia, for thou didst carry the cross and follow Christ. By example and precept thou didst teach us to ignore the flesh because it is perishable, and to attend to the concerns of the immortal soul. Therefore thy soul doth rejoice with the angels.
See also:

Saint Lydia of Philippi as a Model for our Lives

The Baptistery of Saint Lydia Near Philippi (video)